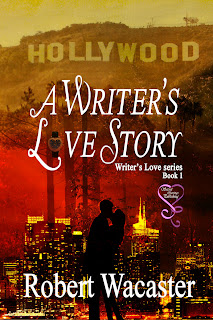 Welcome!  Please introduce yourself and tell us about your latest release.

Hi, my name is Robert Wacaster and my latest release is called A Writer’s Love Story and is the first in a series of three books (Possibly four...working on the fourth now) about two characters named Robert and Katie.  Robert is a new author with a best selling book and Katie happens to be the executive assistant for his editor.  Through a chance meeting Robert ends up buying Katie an expensive watch to cheer her up (She had just found out the man she was going out with was married and had kids.) and she agrees to go out to dinner with him.  From there they quickly fall in love.  But this isn’t a typical love story.
After only having one weekend to get to know Katie, Robert has to leave for Hollywood where he’s supposed to be consulting on casting for a movie based on his first book.  Katie and Robert continue their relationship through cell phone calls always telling each other they are “fine”.  But things are far from fine.  Robert has writer’s block and begins to suffer from depression not able to stop thinking about Katie.  He’s afraid to tell her about how he really feels, or invite her to California with him thinking she has her own life in New York.  Meanwhile Katie is being stalked by the married guy she was going out with and afraid to tell Robert thinking he’s under a lot of stress in California and not wanting to worry him.  The two characters each deal with their own problems until things finally come to a head and they finally do share their real feelings with each other.  The story does have a very happy ending and prepares you to move into the second book, A Writer’s Proposal which is due out later in the year.

Not that scared me while writing it.  But I do have a story with some odd characters in it that I really haven’t submitted or shown to anyone.  I thought it was hilarious when I wrote it (a run of jokes about “squirrel tranquilizers” *chuckle*) but now am not sure how people would take the sarcastic story.  Maybe one of these days I’ll get brave enough to show someone.  *chuckle*  I think it’s titled “Loving the Other Side”.  It’s off buried somewhere.

No, my books are complete fiction.  I do occasionally use the names of people I’ve known throughout my life.

How much research do you do?  Do you research first and then write, or do you write first, then research as needed?

A Writer’s Love Story really didn’t require much research.  I think about all I did was to look up how much a new BMW would cost (A bit important to the story.  I don’t want to spoil things, so you’ll have to read the book.  *chuckle*).  And I also looked up a price for a woman’s watch.  That’s about it.  HOWEVER... 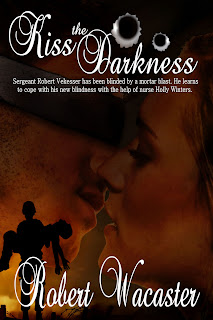 For the first book I had accepted by Secret Cravings Publishing, I had to do quite a bit of research!  The book is called Kiss the Darkness and is about an Air force sergeant who is blinded by a mortar blast in Afghanistan and then falls in love with a nurse at a rehab hospital in Germany during his recovery.  I searched and searched to find out anything I could about a military rehab hospital, but couldn’t find any real information.  No one wants to talk about things like that.  Finally after an exhaustive search I did come across a blog written by the wife of an Army captain who had been blinded by a mortar blast just like my character.  I did use a number of what she had written in my story.  Researching blindness taught me that 70% of our perception is visual.  Now imagine losing that!  That’s quite a tough thing to have to deal with!  In some ways, that was a rough book to write.  It’s actually only a “novella” at around 35,000 words.

A lot of fiction is based on reality.  I haven’t yet found the “Katie” who belongs in my life, but I’m sure she’s out there somewhere.  So for readers who delve into romance novels thinking nothing like that will ever happen to you, you never actually know.  Someday someone special might just walk right into your life and sweep you off your feet!  There are plenty of true romance stories out there.  Go out and find yours!

Are you a plotter or a pantser?  And have you ever had a story take on a life of its own?

I would have to be called a “pantser”.  I just sit down and write.  I do see the story in my imagination and usually when I sit down to write I know where the plot is going.  But I don’t plan things out and make plot notes and things like that.  Things just happen in a story for me.

Now I’m not certain how to answer this question.  I’ve written for years going all the way back to high school.  But until recently I never really kept anything I wrote, or tried to write seriously.  The major publishers always made things so difficult to get anything published unless you were already some huge best selling author.  After finishing my first novel back in 2007 I tried to query some literary agents and just got back form rejection letters in the mail.  They wouldn’t even read anything.  Self publishing was just beginning and I went that route.  A few of my self published books are pretty rough and not edited.  The two books with Secret Cravings Publishing are much more professional, well edited, and have much nicer covers.  I submitted my first book to Secret Cravings last year in 2012.  So maybe you could say I was trying to get published since 2007?

If you really want to self publish, get a real editor and have someone who knows what they’re doing design your book covers.  *chuckle*

Laptop or pen and ink?  What are your ‘must-haves’ when writing?

Laptop.  I don’t think I’d be able to keep up with my thoughts by using ink and paper anymore.  Too used to typing.  I’m not sure I could use any kind of voice dictation stuff either.  I wouldn’t be comfortable trying to speak my story out loud as I wrote it.

Who are your favorite authors?  Who would you say influenced you the most?

My favorite author would have to Stephen King.  I love his books!  But as to who has influenced me the most in my writing career?  Dawne Prochilo and Sable Hunter.  Dawne has probably helped me more than she’ll ever realize as I moved into getting my books published.  She’s influenced a lot of my writing, too.  And Sable?  Sable Hunter is a good friend who is probably one of the sweetest, most humble authors I’ve ever come across.  And the popularity of her books is something I’d love to shoot for.  Sable has shown me that no matter how popular your writing may get, you still need to pay attention to your readers.

Probably that I’m still single.  *chuckle*  After reading A Writer’s Love Story (I used my own name for the main character) one lady asked me if it was a true story.  I told her that no, it was all fiction.  I am hardly a best selling author and have never sold any movie rights for any of my books.  She then replied “No, I meant the relationship.  What went on between you and Katie in the book just felt so real.”  *chuckle*  Unfortunately no, none of it was real.

What is your favorite love scene to write or read?  (ie:  First kiss, passion after a fight, reunion)

My favorite would probably be one that I had written myself and is near the end of A Writer’s Love Story.  Robert is trying to come on to Katie and keeps trying to kiss her and she keeps pushing him away telling him she needs to concentrate.  She wants him too, but is trying to get him ready for an appointment.  Long story...sort of.  *chuckle*

What is your favorite Valentine’s Day memory?

I don’t know.  Back in the military I left a Valentine’s Day card taped to the door of a girl who had just had her wisdom teeth pulled.  (Ah...no, she never did like me in that way.  *chuckle*)  The other thing that stands out was a few years ago when I sent a “Vermont Teddy Bear” to a girl who lives far away from me.  The bear has a heart tattoo on his arm with her nick name inside it.  *chuckle*  Sorry, can’t reveal that friend’s name, though.

Sweetest gift ever given to you?

My brother cleaned the spider webs out of my garage a couple months ago.  Does that count?

Thank you for being here today!  Please tell us where we can find your books.

Amazon.UK (For readers in the UnitedKingdom):

Amazon.UK  (For readers in the UnitedKingdom):

Thank you very much for having me today, Molly!  For anyone interested, you can find me on Facebook and my Twitter name is Secbuzz!
Posted by Molly Daniels at 5:29 AM

Thanks for being with me Robert! I have both books on my TBB list:)