Anyway, I'd like to introduce you to a young lady who has been patiently waiting for her story to be told.

You first met her in Love On The Rocks:


Caitlyn McCarthy tossed her light brown hair over her shoulders. "Aren't you just down the hall from me?"
"Yes. Is Todd your boyfriend?"
"Oh, no. Mine goes to the . I’m just hoping for a motorcycle ride."

In Love Finds A Way, she was the supporting best friend, comfortable in her long-distance relationship with Bryan Johnson, and revealed a quirk:
Amy checked her backpack while Caitlyn was putting on her makeup. “Couldn’t you do that at the airport or something?”
Caitlyn applied another coat of mascara to her lashes. “Sorry, it’s just something my mom always did, and she harped on me in junior high if I didn’t put my face on before leaving the house.” She inserted the wand back into the tube and picked up her hairbrush. “You’re going to wait until later?”
“Cait, nobody’s going to care if I’m wearing blusher or not at four in the morning.”

In Forbidden Love, Cait is moved into the room with Gretchen, Keri, and Stephanie.  And immediately clashes with Keri, concerning Keri's boyfriend Kyle:
Caty threw her notebook on the floor, her green eyes turning dark. "The man has responsibilities. He has a child. He's starting a new job. He does not need you whining, feeling sorry for yourself. Every time you talk to him, it's, 'When can I see you? When can we get together?' Get a grip on yourself and give the man some space!"
"I do give him space, damn it!" Keri dropped her book on the desk. "We've hardly seen each other in the past three months."
"You can't schedule him to act the way you think he ought to act, and it's driving you nuts. Wake up, Keri. The man is not your knight in shining armor."

And in Balancing Act, she clashes with Gretchen:
“For God's sake, Gretchen!” Caty burst into the larger room. “Talk to him. Hear him out. He's driving us crazy! He calls at all hours, ties up the line. Bryan and Kyle can't get through. You've got to do something.”
“Are you kidding?” Lynne shot back. “Give him time. He'll stop calling.”
“No, it's getting worse.” Caitlyn's green eyes blazed as she sat down on Susan's bed. “Some guy named Tom called last night, demanding that Gretchen hear him out.”
“Oh, no.” Gretchen felt the blood drain from her face. “That's his boss. Okay, the next time he calls, I'll talk to him.”
“Thank you. I'm sorry, but listening to Joe yell at me for something you did is not my idea of fun, especially at two in the morning.”
“Why didn't you turn off your phone?” Lynne suggested. “That's what we did.”
“Your boyfriend isn't three hours away.” Caty’s voice rose with anger.
“Stop.” Gretchen looked from one to the other. “It's not worth yelling about.”
“I'm sorry.” Caitlyn stood up and moved past Gretchen. “I just don't like my sleep interrupted.” 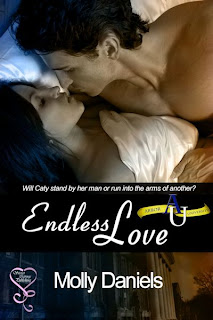 Endless Love shows Cait's stress level going off the charts in the fall of 1988.  The previous February, she'd had a fight with Bryan and went to a party with Stephanie, waking up in Peter Criswell's arms the next morning.  Furious with herself, she gave him a fake number and tried to put him out of her mind.  But when Stephanie crashes her car in early October, Peter resurfaces and demands answers.  Panicked by the thought of her infidelity reaching Bryan's ears, Caty makes a decision which soon has her torn between the two men and at odds with her parents.  When everything in your life goes smoothly and suddenly you begin to question everything you've been taught, whom do you believe is telling the truth, or steering you in the right direction?  Caitlyn tries to please everyone and discovers when you try to have your cake and eat it too, everyone ends up miserable.  Maybe she's been a spoiled brat this entire time and is just now realizing it's time to grow up?
“I can't believe this.” Gretchen set her glass down with a bang. “Doesn’t this qualify as harassment?”
“It’s the only way I can get him off my back.” Caty took a bite of her salad. “If I file charges, then learns about last winter, and anyway, all he wants is a week of my company.” She swallowed. “So all I have to do is show up, choke down something from wherever he takes me, suffer through three hours, and get my homework done. I think I can tolerate him for five days. The man's not unattractive.”
“No, he's downright gorgeous.” Stephanie set down her tray and sighed. “I assume you're talking about Peter?”
“Yes, and he says if I still don't like him at the end of the 5 days, he'll leave me alone. Small price to pay to get someone off your back.” Caty wiped her mouth. “And I'm meeting him on campus, so he won't find out where I live.”
“I wish he'd woo me like that.” Steph sat down and sprinkled salt over her meal. “Did I tell you my dad bought me a Sunbird?”
“So you're not buying from him?”
“No. Dad found it for $500. It's six years old and needs a new clutch, brakes, and a tape deck, but it runs.”
“That's good. What color?” Amy scraped the last bit of mashed potatoes from her plate onto her fork.
“Dad didn't say. Keri's going to install the tape deck for me.” Stephanie drained her pop. “I’m going for a refill. Be right back.” She stood and left.
“Why would have to know the details?” Gretchen's mind was still on possible harassment charges.
“Look, my mother would fill him in, trust me.” Caitlyn picked up her tray. “This will work faster and not cause a lot of financial or mental hardships. Besides, if dinner lasts an hour, and I do my homework for ninety minutes, add in travel time, the three hours add up pretty fast. Piece of cake. I'm going for ice cream.”

There's your sneak peek:)  I received my round #2 edits yesterday and sent them back late last night.  I don't know if we're still on track for the release date of tomorrow, or if it's been pushed back another week.  I'll find out later today:)
Come back tomorrow for more details!

This just in:  Endless Love will release next Wednesday, March 5th:)

Currently Reading:  Loved, loved, LOVED I Never Fancied Him Anyway!!!  Definite Recommended Read!!  Saw at the back it's been optioned for a movie.  Wonderful!!  Now reading Julie Garwood's The Prize and in e-books, Mona Risk's Christmas Babies:)

How exciting that your characters keep visiting and you see them change over time! Best wishes with the release!