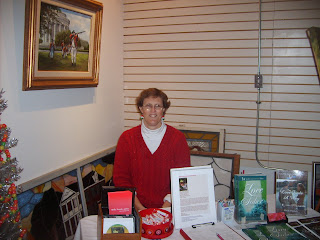 Had a great time at the annual Santa Stroll:) The weather was mild; I handed out several promo items and added many more email addresses to my newsletter list. And yes, even sold one. Better than last year, when the wind was frigid and most people were hanging on tight to their cash. They're still watching their cash, but the artis who painted the picture on the wall behind me sold three of his paintings in the week his work has been on display.
Don't know if you can see it or not, but I'm wearing my Santa Hat/jingle bell earrings! We were all in a festive mood Friday night:) 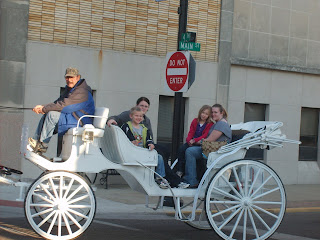 Saturday afternoon, one of the attractions was a free carriage ride. The spouse and K were on a BSA camping trip (K's final one as a Life Scout; he'll complete his Eagle rank in the next two weeks), so daughter S brought her little brother, her friend A, and A's little sister R downtown. They were too late to see Santa, but they enjoyed the ride:)
And later, after I got home, S and A went to see New Moon and came home both excited and upset that the movie "leaves you hanging! We have to wait a whole year to see what comes next!" Girls, you read the book; you know what comes next!
"But it's not the same as seeing it in the movie!"
Teenagers....
Monday Monday...
Woke up with a clogged right ear. I've already taken a decongestant and some Tylenol for the pain. I'm hoping this doesn't turn into another full blown ear/sinus infection! I've not had any problems with this ear since the chronic problem back in 1996 and had to have a tube put into it. I battled a mild sinus headache Saturday night and again yesterday after church. I'm fine as long as I'm either upright or laying down. Don't ask me to bend over or hiccup; pain rushes to my forehead. And since this is Day #1 of Operation Clean Up, I'll do the dusting and vacuuming; the spouse can do the bending-over stuff! And afterwards, I'll lay on the couch and watch the rest of the Law and Order: SVU marathon I ended up DVR-ing while I cooked dinner and later chatted with several authors during Anny's Birthday Bash! Kenzie very nicely posted two birthday excerpts from both books, and received some nice comments:)
And The Next Iron Chef is...
Chef Garseus!
It came down to creativity and basic cooking skills. Chef Meta, the Indian-background pastry chef, had the creativity, but lacked some fundamental cooking skills; one of the judges constantly harped his food was 'too sweet', and several dishes during this ten-week competition were either undercooked or overcooked.
Chef Garseus, who had a Latin American flair to his cooking, had similar problems during the entire competition, but got everything right last night in Kitchen Stadium. His dishes were considered 'safe, yet boring' by the judges, and it all came down to who would blossom the most under the current Iron Chef's tutelege. And since all five of his dishes were cooked to perfection, they decided he stood the best chance.
Have a good day!
Posted by Molly Daniels at 5:56 AM

Hello
generic effexor
Moreover, adults with the problem of panic disorder are greatly recommended to prefer Effexor XR.
[url=http://www.outdoorwildernessinfo.com/]buy effexor[/url]
Moreover, Effexor is meant to use for adult uses only, in general.
http://www.outdoorwildernessinfo.com/ - purchase effexor
Taking the Effexor along with Mao inhibitors, such as Parnate and Nardil, can result to really life-threatening problems.

New Moon and a carriage ride?? You lucky dog. I get to see New Moon this Friday, but sigh, who knows if I'll ever go on a carriage ride. Sounds wonderful!