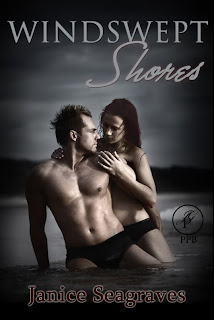 Hi, my name is Janice Seagraves. I’m a romance writer. My first book which came out in June is called, Windswept Shores.

Blurb: The sole survivor of a plane crash, Megan is alone on a deserted island in the Bahamas until she finds a nearly-drowned man washed up on shore. Another survivor, this time from a boat wreck. With only meager survival skills between them, will they survive and can they find love?

Well, I had thought of including rats in Windswept, but nixed that idea right away. I do not like rats! Ew! *glances around* Did I just hear a squeak? Oh, thank God, it’s just my chair.

Oh yes, my couple in Windswept is basically camping out on the beach, so I was able to including my years and years of camping experience which I had growing up with a fisherman for a father.

I also told my hubby he was the inspiration for the sex scenes, which made him puff up his chest and strut around the house for the rest of the day, lol.

I basically research as I go along. In Windswept I used the internet and books to learn more about the Bahamas. I also purchased books so I could get the hero’s Aussie accent just right. Then I bought a couple of DVDs of the Bahamas, so I could see how the waves rolled up on the shore.

Since my heroine is older than the hero the message is: “It’s never too late to have a second chance at love.”

I’m a pantser and yes my stories tend to run off with me. So I have to hang on real tight and see where they take me.

I started writing toward publication almost twelve years ago. I had a lot to learn and used that time taking a correspondence course, and then a series of workshops to help me learn the craft of writing.

My book Windswept took me two years from tentative beginning to final polish.

To not lose faith that it will happen, so keep reading, writing and learning.

I have a Gateway laptop, which I can’t work without it.

When I write I drink tea. Hot when it cold and cold when it’s hot. I also keep a bottle of water close by too.

Oh, gee there are so many. JRR Tolkien was an early favorite so was Victoria Holt, which is funny because the two can’t be more different in writing style. But then I have a very eccentric reading list.

Then later it was (and still is) Anne McCaffrey, Andre Norton, Jim Butcher and Pat Hodgell, just to name a few.

I’m not a natural redhead.

Since it is January, what are your goals for the coming year?

To polished up my SF Rom series and submit it.

What is your favorite New Years’ Eve memory?

Making champagne punch and then playing killer Rummy with a friend and her mother and sisters. It was fun, the more hammered they got the more I won.

Is there something you really wanted for Christmas, but didn’t get?

Lots of things, but I was a much deprived child. But once I grew up I’ve had to stop my hubby from buying me too many things, lol.

As a child I’d always pray for a white Christmas and be disappointed when we didn’t get one. The closest we got was a hard frost. L But now that I’m older I think I’d prefer white warm sands in a beautiful setting instead. J

Here’s something warm to read while the nights are cold.

BLURB:
The sole survivor of a plane crash, Megan is alone on a deserted island in the Bahamas until she finds a nearly-drowned man washed up on shore. Another survivor, this time from a boat wreck. With only meager survival skills between them, will they survive and can they find love?

EXCERPT:
Breathing hard, she flicked a glance at the teal-colored sea. She’d thought a vacation to the Bahamas would be the perfect getaway, would be a solution to the problems she and Jonathan had faced. She’d been wrong—dead wrong. Tears of grief filled her eyes. The never-ending crash of the waves on the beach and the cries of the seagulls seemed to mock her with the reminder she was utterly alone.

She’d felt like a tiny speck of sand last night when a violent storm had swept across the island. It had made a mess of her meager campsite, which had taken all morning to fix, and had demolished her seaweed SOS sign. She’ll have to recreate her SOS. Sighing, Megan trudged toward a pile of kelp. As she got closer, she saw a figure wearing blue jeans and a t-shirt. Her stomach lurched.

Oh, God, it’s another body washed up from the plane wreck. That would be number twelve. As always, she couldn’t help but wonder if the next one would be Jonathan. He hadn’t been wearing jeans on the plane, so she knew she’d been spared seeing his corpse this time. Thank God. She approached the body with dread. Tightening her resolve, she knelt. Suddenly the “dead body” coughed and rolled over. With a scream, Megan jumped back. She clutched her chest and pressed a shaking hand to her mouth.

Biting her lip, she stared down at the still-breathing man. His drenched t-shirt molded against his broad shoulders and well developed upper body. Short, golden brown hair stuck out in all directions.

Megan, get control of yourself. Don’t wet your pants the first time you finally see a living person. She got on her knees, plucked the seaweed from him and wiped the sand from his face. His day-old whiskers scratched her palm. Reddened skin stretched across both cheekbones and over the bridge of his nose. Her thumb caressed his parched full bottom lip.

She patted the side of his face. “Hey, are you okay?” That’s a dumb question. He isn’t okay.

“Hello there.” She hated the sound of her voice. It sounded rusty, unused.

Abruptly he rolled away from her to heave onto the sand, making a loud, ugly retching noise.

He wiped his mouth with the back of his hand, then looked at her. “Sorry, mate, I swallowed too much sea.” His gaze went over her shoulder in the direction of the bonfire which crackled and popped not far from them. “Mite big for a barbie.”

Sitting back on her heels with her hands folded in her lap, Megan followed his gaze, then back to him. “My signal fire.”

His accent intrigued her. Was he English or Australian?

“G’darn,” he looked around, “where the bloody hell am I?”

“Don’t know. There’s no one here to ask.” Megan shrugged helplessly, but couldn’t contain her curiosity. “Are you from England?”

“Naw,” he rubbed his eyes, “I hail from Sydney, but my port of call these days is Fort Lauderdale.” He blinked up at her. “You?”

Ah, he’s an Aussie. “I’m Megan Lorry, from Anaheim, California,” she said, barely loud enough to be heard above the sounds of the surf and the roar from the fire. “Are you a survivor of Air Bahamas flight 227, too?”

Now also available at Smashwords, Diesel, All Romance and for the kindle at Amazon.

Posted by Molly Daniels at 3:25 AM

Oh, there's that sexy cover again! I have the magnet of it on my frig so I can look at Seth every time I'm in the kitchen.

Thank you, Molly, for having me here at your blog today. :)

Hi C., I'm glad you like it. I found the photographer of that cover and he lives in Brisbane Australia, which I thought was cool since Seth is an Aussie.

Great interview, Molly and Janice! This book sounds sexy and intriguing.
Thanks,
Bobbye

Great book, beautiful cover and I love how you spend New Year's Eve -- punch and rummy. Deal me in.

Hi Bobbye Terry: Yup, that's what I was going for. :D Thank you for noticing. :P

Hi Cassie: Yes, that was a fun (for me) New Years Eve. Your welcome to join anytime. :D

Fantastic interview and excerpt...I love reading how stories are brought to life.

Thanks for being with me this week Janice:)

Wishing you many sales, Janice.