Last week, this tiny child arrived, weighing 6 lbs, 9 oz, and 19.5" long.  He spent his first twelve hours enjoying the company of his mommy, 2 grandmas, his great-grandma, a great-aunt, and a cousin. 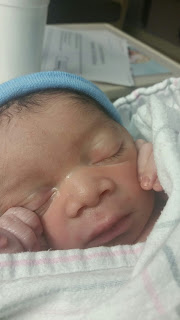 By the time he was a full day old, he was in the NICU, having experience a few small seizures.  Apparently before being born, he'd let loose with his bowels, causing his amniotic fluid to become infected and his mother to spike a fever.  MDQ recovered from her fever, but Master P's tiny body needed some extra care.

When I saw him at the 36 hour mark, he was alert, happy, and seemed to enjoy the fact that I was willing to stroke his tiny ankles. 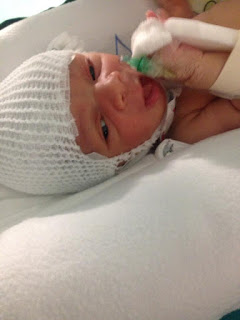 He also held one of my fingers in his tiny fist:) 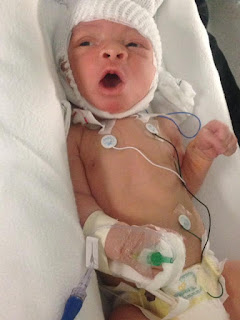 I was rubbing the back of his right foot, then decided to stroke the left one.  He quickly pulled it up, so I stopped, and resumed my ministrations to his right.  Suddenly, a tiny foot wiggled its way into my palm, so I stroked both with different fingers:)  This went on for several minutes, until he needed a diaper change:)

"No pictures..." said my step-daughter.  "I don't like nudie pics of newborns."

So I filmed it:)  I just wanted to capture my granddaughter's first attempt at changing her son's diaper, and we had some good laughs over what little boys do when they're no longer confined in a Pampers.

Master P behaved himself, and did NOT soak down his mom, the bed, or the assisting nurse:) 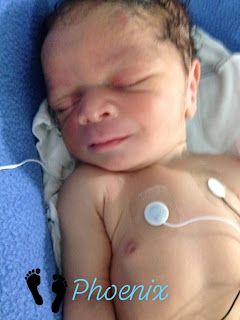 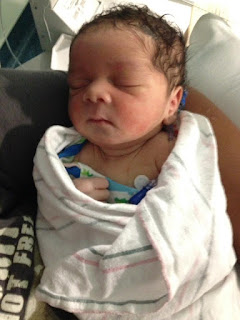 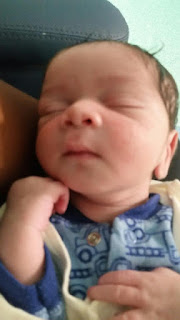 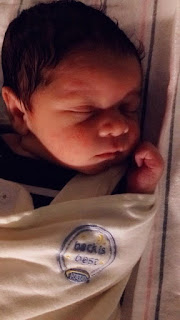 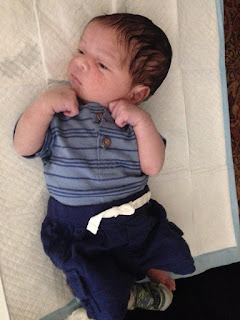 And finally, his one-week picture, out of the hospital and home in his new little bed:)

I've been told I can't hold him until his other Great-Grandma gets to, so I'm hoping it's SOON!  I'm only going to be an hour away for a few more weeks, and I'm dying to hold more than just his tiny feet!
Posted by Molly Daniels at 8:11 AM