Jan 2009:
For today, I need to back up to New Year's Eve, 2008:  A neighbor decides to take the young kids to the park.  When they return, they are full of excitement, for they have a tiny kitten in their arms!

We already had a dog and two rats.  I did NOT think the spouse would want a cat in the house, so I told them to take it to the shelter.  Tiny problem....the shelter was closed for the holidays.  We could either dump it outside or take care of it.  We chose to take care of it. 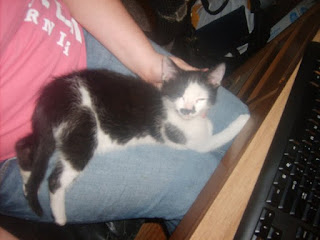 I told the kids to let ME drop the news to my spouse; however, the minute he stepped through the door, Miss Drama Queen spilled the beans.  Fortunately, D took one look at the tiny kitten, dubbed 'Oreoz', and fell in love.  We bought a litter box and some food, and he proved to be an interesting addition to our household.

The Oreo/Pinky/Mikey Morning Show/Comedy HourThere is a new comedy show in town and it takes place on the piano bench in my living room. Oreo, our newest addition, has been very curious about the strange cage sitting on the bench and the strange little creatures running around inside of it.Act 1: Oreo either climbs onto the blue chair to stare into the wire cage or attempts to jump onto the bench. He doesn't quite make it, and his tiny claws usually catch the beach blanket under the cage. He will dangle until he retracts the claws, realizing he's only inches from the floor and can drop safely. Once in a while he will actually catch a claw on the bottom wire of the cage, but never dangles for long. 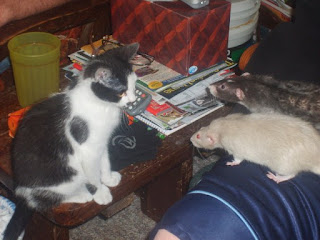 Oreo and Pinky
Act 3: Pinky enters. If Oreo is looking in, he takes his tiny paws and swats the kitten. Mikey will arrive to see the action, but normally flattens down in the cedar chips, thinking if things go wrong, Pinky will be eaten first. 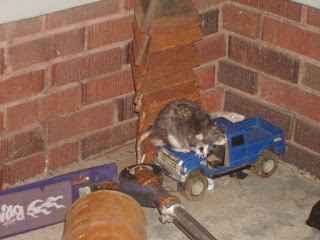 Mikey, aka 'Michael J. Templeton'Act 4: After witnessing no further retaliation from Oreo, Mikey pokes his head up and adds his tiny paws to the battle over whose turf the cage belongs to. He'll swat, duck; swat, duck. Eventually, Oreo tires of the onslaught and jumps off.Act 5: Pinky and Mikey take a 'Victory Lap' around their cage, having successfully chased away the giant predator who dared to investigate their home! Unfortunately, this causes the need to visit the water bottle, and the noise usually draws Oreo's attention back to the cage! But this time, he keeps his distance. But only until five or six hours later, when he feels the need to entertain the humans again. 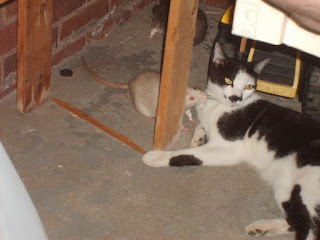 Want to read something funny?  Check out this post from Jan 20th.

The 23rd was when Kenzie Michaels received her official contract from Freya's Bower:)