"Satan Called; He Wants His Heat Back!"

So says a FB picture floating around.

Seriously, the temps the last several weeks have been in the mid 90's to 108.  Our two a/c units are working overtime, along with four fans.  But with the addition of two kids, the spouse bought three more fans to help with the heat.

My concentration is poor; I'm not sleeping well (due in part to needing a new bed, coming next month); and I'm trying to hang onto my temper.

We DID take the kids to the pool on Tues, and then to the fair, so everyone had a good time.

Yesterday was one of those days where nothing went as planned.  Daughter thought she was having an appendicitis attack; turned out to be just a cyst on her ovary.  Then her boyfriend made threats, which caused her more stress, and thankfully I was able to get her to think straight again.

It's supposed to rain tonight, and the temps are supposed to fall back into the high 80's/low 90's.

I've made some calls for my 'tour' in the coming months; check out the calendar to the right.  Not sure if I will be able to attend all, but I'm going to try:)

In the meantime, check out this awesome picture of Miss Alex:) 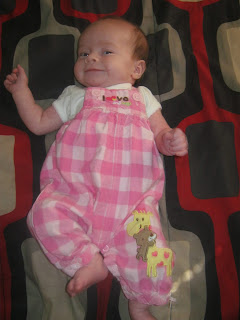 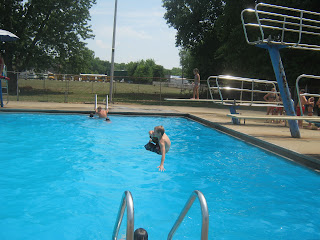 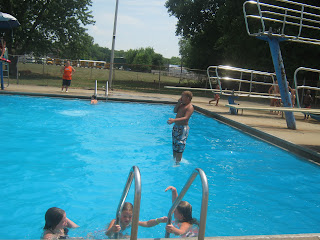 Miss Drama Queen won't go off the diving board, so here she is swimming away:) 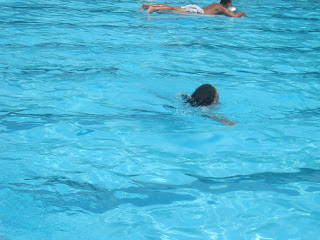 Saturday is Dollar Day again, so we may make one more trip back to the pool to cool off.

Come back tomorrow for memories of July 2002; we took a vacation to Estes Park, Colorado:)
Posted by Molly Daniels at 8:19 AM

I'm with you. Normally loving the heat, it has me all fuddled lately. 116 heat index is ridiculous. Even for summer babies like me.

That's how it's been here since May. So wrong!

@Barb: She is a doll! And soooo good:) Already sleeping through the night, rolling from front to back, and pulling her grandpa's beard every day. She's done her job well; she's got her grandpa so wrapped around her fist it's cute to watch him with her:)