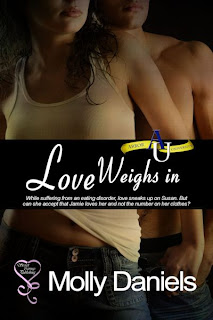 Love Weighs In Has Arrived!!!
Blurb:
What happens when your roommates are pencil-slim without trying, and you gain a dress size by looking at chocolate?  Susan Best struggles with her self-esteem after a bad break up.  She diets in the wrong manner, and soon it's almost out of control.  When love sneaks up on her, can she accept the truth her man loves her, not the number on her clothes?

Travis Freeman was instrumental in jump-starting Susan’s singing career.  But he didn’t count on the dark side of being in the spotlight, and stands by helpless as the woman he loves spirals out of control.  But after alerting her friends to the problem, he risks losing her altogether.

Jamie watched his identical twin brother Rob break Susan’s heart.  Thrilled by the fact their friendship is rekindled, he appoints himself her personal body guard during their summer job.  But when he kisses her, is she picturing his brother?

“We’re getting a better response when you’re out in front, Susan. Do you think we can split up the lead on the next set? I’ll sing the first verse and you the second. We can switch back and forth after that.”

Susan hesitated. “Do you think it will work?”

Glenn nodded. “Hell, yes. The boys love you out there, and the manager’s thrilled. The more they dance and yell, the thirstier they get. Ergo, the more drinks they buy.”

“Ergo?” Susan laughed. “I didn’t think you knew that word.”

“I’m a man of many hidden talents, my dear.” He saluted her with his beer.

Susan downed her ice water. “Let’s try it. It can’t hurt, and like Glenn says, they’re all drunk now, anyway. I doubt they’d notice if we flubbed up.”

“You’re not going to flub up in front of us, are you?” teased a familiar voice. Susan looked up in surprise as Gretchen, Shawn, Amy, Brad, Caitlyn, and Peter approached.

“Hi, guys.” Happy to see them, she stood up and hugged her friends. “No, we’re just talking about making a slight change in the last set.” She introduced the band members.

“We just got here. Let’s go find a table and get a round of drinks. Break a leg, kids.” Gretchen ushered the rest toward the bar.

Susan excused herself to use the rest room and overheard a disturbing conversation between two other girls.

“...can’t believe she’d have the guts. I mean, did you see the size of her thighs? And that shirt. Good lord. You’d think people who pork out like that would have the decency not to tuck their shirts in like that.” A toilet flushed.

“I know, and can you believe her voice? I sing better than that in the shower.” Water running and the hand dryer drowned out the voices.

Are they talking about me? I’m not leaving until I know they’re both gone. She peeked through the crack between the stall door and the wall and saw the two girls touching up their makeup.

“She needs to get with the times.  The Madonna look is so three years ago.”

“At least she’s not wearing a miniskirt.” Their voices disappeared as the door slammed closed.

Stunned, Susan left her stall. She looked at her reflection in the wavy mirror and studied herself. They’re right, I am a fat slob. My stomach has this bulge at the zipper, instead of being nice and flat. She stuck out her tongue and washed her hands. And my thighs do look awful in these jeans. Why oh why did I even wear them?

Because you were in a hurry. You were so happy after messing around with Travis, you forgot to be careful with what you wore tonight. Now people are talking about you!

How can I get up on that stage and wow them for another ninety minutes? They don’t want to see me or hear me. I heard that woman! I sing like I’m tone-deaf or something! Susan brushed aside the few tears. I’ve got to get back out there and fake it. Nobody’s forcing me to continue after tonight. I’ll finish this last set, even though my friends are out there, hearing us for the first time.

And since it wouldn't be release day without a contest, answer this question: What was Susan drinking? 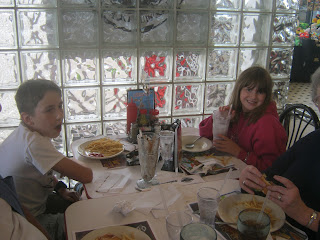 Lunch at Steak-n-Shake.  This is my nephew D and niece R, eating with Grandma and Grandpa in Bloomington, IL. 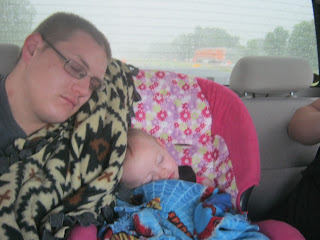 After lunch, Uncle K took a nap with Miss A:) 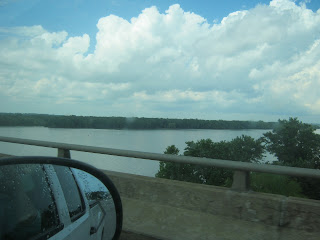 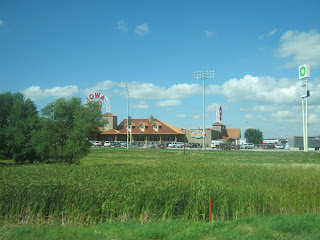 In Iowa, we kept seeing signs for the 'Adult Superstore'.  It doesn't look that big to me; guess it's like the TARDIS, and is bigger on the inside? 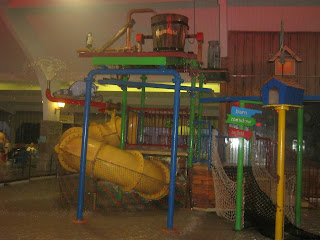 Part of the pool area in Williamsburg, IA.  D, R, and my youngling had a blast on the two water slides, and R went down this smaller slide as well. 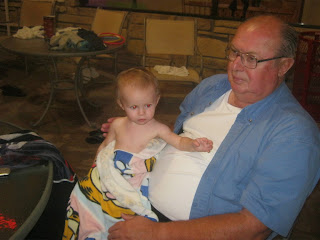 Miss A thought the water was too cold and spent an hour on Great-Grandpa's lap! 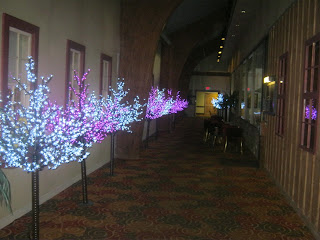 The very pretty trees in the hallway outside the water park:)
Posted by Molly Daniels at 8:18 AM

Congrats and best wishes with your new book! Many, many sales!

Love the new book... She was drinking ice water!

The photos of your vacation are great! Thanks for sharing. I'm jealous.

Glad you enjoyed the pictures:)

Lots of sales, girl. I love books about women struggling with weight, since most of us do. She was drinking water, smart girl that she is...