Currently Reading: Mona Risk's Babies in the Bargain. I've made it to Ch 10! I'm thoroughly enjoying it, and wishing I had an e-reader! If I had one, I could read while waiting for K to appear after football practice:) 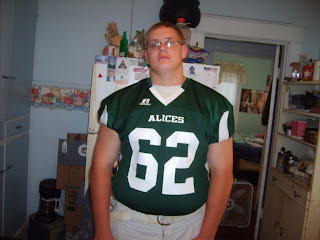 Take a look at this handsome guy! Yes, he wasn't thrilled when I cornered him last night. Oh well....Mom reserves the right to any and all pics of her Varsity Football player, esp since this is his senior year! 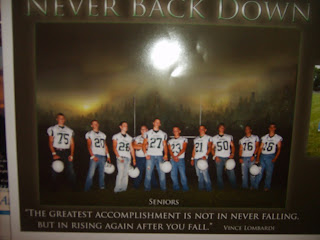 K is 4th from the left, the one 'hiding' with his arms crossed. This is the poster distributed around town and school. His friend J is the one on the far left, who was most helpful at the Watermelon Festival:) Anyway, above two pictures is the subject of this post.

I've been looking at my fall calendar and have had to make some tough decisions. With K playing football and me wanting to attend as many of his games as possible, my usual round of festivals are going to have to take a back seat this year.
I'm upset that I can't make the Eminence Fish Fry this weekend; I have little gas money, and I'm regretting giving into the childish pressure last year and skipping it. What happend last year? Spouse threw a hissy fit; K and I decided not to risk his wrath; D came home, expecting to be 'taken care of' by S and discovered we'd caved and stayed home. "Next year..." I said. Well, not so fast. D is working nights; I only have a half a tank of gas, and I want to attend K's first official game tonight. So once again, "Next year..."
I'm also going to bow out of the Monrovia Festival in September. Again, it conflicts with my son's football game. And besides, I dearly want to attend RomatiCon in October, so I think D will be more okay with paying that fee instead of several little ones. And there is no game that weekend, unless one has to be rescheduled.
Yes, it's a slightly bitter pill to swallow, but RomantiCon will actually further my writing career, while I'm barely breaking even on the festivals and hearing my husband gripe about the 'waste of time and money', unless I've sold more books than expected (and then he's happy...go figure!).
I'll still be able to do both our county's Fall Festival (weekend after the conference) and the next county over's, as well as the Santa Stroll. And maybe by next summer, Kenzie will have another book out and Forbidden Love (book #3) will be accepted somewhere. I'll just have to hope and pray everything works out.
BB Update: Lydia got her wish (during her drunken tantrum) and 'Captain Unitard' was voted out last night. And I forgot to DVR After Hours, so I have no idea who the next HOH is.
Enjoy the weekend; my dad's coming into town for the game tonight, and the kids are excited about seeing Grandpa, who's spending the night:) I see a trip to Dairy Queen after the game, hee hee...and I hope to have pictures either tomorrow or Monday.
Sad note to pass along: My friend and fellow author BB Walter had a death in her family this past week. She's in town for the funeral, and I hope to see her sometime today. Keep her family in your thoughts please?

Posted by Molly Daniels at 6:07 AM

As someone who just took her baby off to college, I can tell you from experience...don't miss a THING! This time next year, he'll be off somewhere on a new adventure! On another note, I'm thrilled you are coming to Romanticon. I can't wait to meet you.

I agree with Regina - don't miss a moment of his senior year. It's over before you know it! Darn, I wish I could go to Romanticon I want to meet all you ladies. :(

This is exactly why I don't do many booksignings or even author chats online. My daughter constantly has either rec, highschool, or travel ball going on. Since she's not driving, I have to take her, but I also like to be with her. I thought it would end at the end of her highschool year and I'd get a reprieve unless my 14 year old suddenly got involved in something (he's a homebody and usually resists sports and clubs). But she's going for at least one more year.

It won't last forever and I fear I'll miss these days. She'll soon go off and live her own life and I won't be allowed to be with her so much as now. I'll cherish these times and later I'll have time for all the chats and signings and cons.

But I still wish I could go to Romanticon. I can't afford to do much of anything right now, so maybe next year.

Oh, and I think your hubby is brothers with mine. My hubby is the same way with my writing stuff. He's okay with our daughter's ball stuff as he's totally into that.