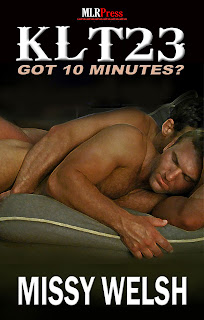 I did have one idea for a story that freaked me out, yes. I wasn’t so much scared as a bit alarmed that something that dark had come out of my head. I’m sure anyone would be concerned if they suddenly had a serial killer chatting them up to tell his story. O.o He’s locked away for now.

Oh yes. My first book, My Summer of Wes, was about a recent high school graduate who lived through four years of high school bullying. I made his experiences more violent than mine ever were, but the theme was one I knew well. It was both painful and therapeutic to write about Malcolm Small, but he still remains my favorite character.

I write then research, so I’m only looking to answer the questions I couldn’t while writing. For example, in My Summer of Wes, Mal’s boyfriend restores classic cars. I like looking at them and I like car shows, but I didn’t know anything more about them like how long it takes, where you get parts, how much they sell for when complete. I wrote a lot of the scenes and bluffed my way through it, then I did my research and polished those scenes with my new knowledge. For my second book, Take The Shot, I needed information on the online porn industry and for KLT23, I needed to understand military ranks.

Not so much a message as a feeling. I want the stories I read to have satisfying and happy endings, so I want to give those same feelings to my readers.

I think I’m a little of both, with frequent bouts of pansting. I might see a photo that immediately inspires a short story that I can bang out in a few hours. Sometimes, though, I’ll get an idea that comes with a series of events that will form the plot.

I started writing when I was 12 and was published the first time when I was 34. :) Technically, though, I’d say it took about a year. After reading a ton of M/M Romances, I finally decided to give writing one a try -- heretofore, I’d only written M/F and only for my own happiness. A year later, when I couldn’t polish that story any more, I submitted the story to Loose Id and they gave me my first contract. Within 5 months, I was published.

I think I would’ve told myself to jump in and submit something a lot sooner than I did. Self-doubt is a b*tch. I waffled back and forth for way too long between feeling like I so had this and feeling like I couldn’t possibly measure up. What was the worst that could happen? A rejection letter? You know, most electronic publishers or small presses actually send you the reasons why they’re rejecting your submission. Fix it and send it in again!

The things I need are my MacBook, a beverage, white noise of some type (fan, fish tank bubbles, street noise), and being left alone for several hours. It’s the last part that can sometimes be really hard to come by. LOL:) Isn't it the truth? I've joked about locking myself in a motel room for a week by myself!

Suzanne Brockmann and her Jules Cassidy character sent me down this road, but it was really authors like Jet Mykles, J. L. Langley, M. L. Rhodes, Josh Lanyon and Jordan Castillo Price who gave me my M/M Romance education. And I’m still learning! I’ve been reading Stephani Hecht’s Lost Shifter series and thinking about writing my own series soon.

What is your favorite Spring Break vacation?

My family is big into Disney and our favorite time to go is late winter/early spring. It’s not necessarily Spring Break, but we love the smaller crowds and cooler weather of Disney World around this time of year. I don't blame you! I've only been to Disney in the summer time and 90-100 degree weather!

Technically, as a Protestant Irish, I’m supposed to wear orange, but I’m kind of a rebel and get my green on instead. I have a pair of earrings that say “Kiss me, I’m Irish” that I love because most people follow through seeing as how they had to lean in to read the message anyway ;)

I’m a March Madness fan. Do you follow the college basketball tournaments? If so, who’s your favorite team?

The only time I followed basketball was when Lebron James was in high school here and later playing for the Cavs. Now that he’s abandoned us, the sport is dead to me :P

Thanks so much for having me here, Molly! This was fun! You can find my books at most eBook sellers, but you’ll always find the latest information, blurbs, excerpts and links at http://missywelsh.com.

Sergeant Horatio Muir has fallen hard for the genetically-engineered super-soldier he’s been assigned to observe for the past several months. Now, when Kelty′s life hinges on the scientists who made him finding a cure for the illness slowly killing him, Muir might just be exactly what Kelty needs. Muir’s willing to sacrifice anything to save his man, including his heart, but will it be enough?

I seriously loved my job, despite it consisting of me sitting like veal in a booth all day long. What I loved was the part where I got to watch the man of my dreams on that monitor and through the glass window in front of me. Every day, all day long.

Except now, I was seriously not looking forward to having to watch the man of my dreams fuck some woman even though the brass thought it would save his life.

He had been genetically engineered to be the perfect man and perfect soldier. He was their twenty-third try and the one that looked like he was going to make it. The others hadn’t made it to this stage, having never achieved consciousness after they came out of the incubators. This one, KLT23, had been exceeding expectations from the very beginning. Until he’d gotten this illness they couldn’t identify and couldn’t cure. Until Dr. Miles came up with the theory that KLT23 needed to get laid like Spock had in that Star Trek episode. Fuck or die. And in came the women.

I called him Kelty in my head, and I was growing to enjoy his method of telling these bastards he very much did not want yet another naked woman brought into his domain. This last one had walked in stark naked, gone straight for his bed, laid down and spread her damn legs. In the air! I’d held my breath in horror as he’d gone over there, but he’d grabbed her by her hair and encouraged her to get the hell out.

She’d just left, sobbing, and I watched him stalk back over to his bed and flop down. His gorgeous dick rested against his abs and he stroked it almost absently, closing his fevered blue eyes with a loud sigh. My dick grew that much harder as I watched him. He’d been walking around naked and hard as a rock for three days now. Three fucking days! And I got to watch him for every hour of my shift. It was like some kind of superhero porn channel. Except… I sighed yet again, staring and feeling that niggle of worry swim around in my gut. They said his brain wouldn’t be able to take much more of the fever. If they didn’t figure this out, he would die and it would be horrible. The most amazing man I’d ever known and I might have to sit out here and watch him die.

It wasn’t just that KLT23 was a physical embodiment of everything masculine and drool-worthy. He was smart as all hell, a really quick learner, had a huge stubborn streak, and a wiseass sense of humor that always cracked me up.

He’d picked up six languages already and got a kick out of having a Russian day or a Farsi day where he’d only speak that language regardless of how much they yelled at him to knock it off. He read the military biographies they gave him so fast that I was having trouble keeping up with reading the same books at home in my off hours. I didn’t know why I bothered since they’d never actually let me talk to him about them. Well, I guess I just wanted something to connect us more than me staring at him for eight hours a day. More than him occasionally staring back.

Like now. He watched me, sweat on his brow and cheeks pink, looking so alone. I wanted to go in there and give those amazing lips a reason to smile. He kept making me want to take care of him like I’d never wanted to with anyone else. And we’d never said a word to each other, so that was just…pathetic.

I sighed and tried to refocus on the conversation happening beside me.

“This isn’t working,” General Derringer said, rubbing the bridge of his nose under his glasses. “Why the hell isn’t this working?”

“I think I have a theory,” Miles said, and I couldn’t help leaning a little closer to hear. I loved how that little nerd’s brain worked.

“Well?” Dr. Rudolph asked impatiently, his face flushed like a wino at Christmas.

“I don’t think he likes women.”

I nearly fell off my fucking chair.

Posted by Molly Daniels at 4:25 AM

Summer of Wes sounds like an emotional read. I'm sure both are great. Enjoyed the interview.

Thanks for visiting, Amber!

Amber, My Summer of Wes was awesome :)

Interesting excerpt...I'll have to add this to my TRB list!! I'm a huge Disney World fan too...we were just there first week of March for a surprise trip for my daughter's bday!

Thanks for being with me today Missy:)

My sister was down in Disney for the marathon, Stephanie. I was so jealous! And of course the stinker had to go and send me photos all day long. Oh well! I'll be down there next year for sure :)

Thanks for having me, Molly!