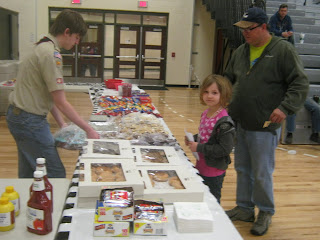 District Pinewood Derby:
The concession stand. Customers (I and her dad) standing in front of the baked goods. Farther on down were various chips and candy, and the 'goodies': Race flags, hot wheels cars, and gum. My brownies were the first to be bought, followed by the snickerdoodles, my chocolate chip cookies, and the Rice Krispy treats. 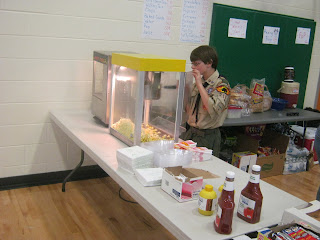 The hot dog and popcorn machines, and the crock pot full of chili. This is the scout who drove me crazy the entire day; he always wanted to make more popcorn! I finally managed to convince him we didn't need to fill the entire machine, and as it turned out, the last batch he popped, we only sold four bags of it. He started the batch while I was taking pictures. Sneaky kid, lol.... 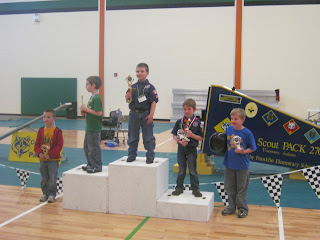 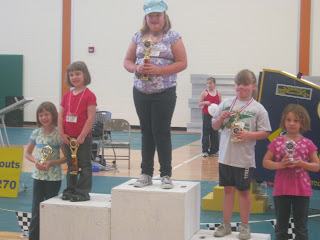 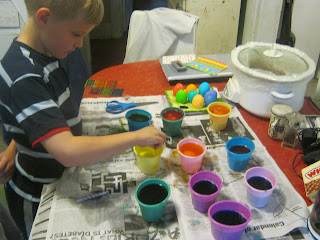 Easter Weekend:
Saturday, we colored eggs, and had a bit of a mystery: I boiled 2 dozen; two cracked, so were eaten. So why did I have three missing? We still don't know.

I had the daughter boil five more, but one had to be eaten. Still, I had plenty for deviled eggs:) 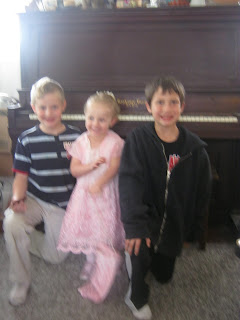 We supplied the ham, deviled eggs, salad, raw veggies and dip, mashed potatoes, and hot rolls. L's family showed up with soft drinks, and B's mom brought two side dishes and three desserts. So a good time was had by all.

Daughter hid several plastic candy-and-money filled eggs, and all three kids had a blast hunting eggs! L's grandparents were thrilled I even had baskets for all kids, since their local egg hunt had been canceled, due to the rain.

How was your Easter weekend?

Come back tomorrow, when the lovely Ms Barbara Huffert will be taking over this space:)
Posted by Molly Daniels at 8:37 AM

Beautiful children that you have. I loved the concession stand. I hope that yall made some money.

We actually did very well, Harlie:) The scoutmaster is hoping we don't host again next year, but I hope we do:)