May 2002:
Recap:  I'd been rudely ousted of my concession manager position and half the community was in an uproar over it.  Coaches, kids, and parents called me in April, complaining of the way things were being handled.

When games began in earnest, I also began to hear complaints from other teams.  My husband witnessed one man returning from the stand with only a hot dog and calling to whomever, "Management changed; it's not as good as it was last year."

One of the visiting coaches we'd gotten to know pulled me aside for my version of the change, then shook her head.  "Why the hell would they change something that ain't broke?"  All I could do was shrug my shoulders.

And L never did ask me to help out during the regular season.

Elsewhere, my oldest had finished the 4th grade and was wishing he could stay in the 4th forever, or at least have his teacher move up with him.  He also completed his 1st year as a Webelo scout, and was looking forward to selecting a Boy Scout troop.  Daughter had completed 1st grade and was looking forward to the next year.  Quite a change for the child who announced the first day "School's too long.  I wanna quit!"  I'd told her, "Why not give it a week before you decide to drop out of school?' She had agreed, and the next day announced she LOVED her teacher, and couldn't wait to see what was going to happen the next day. 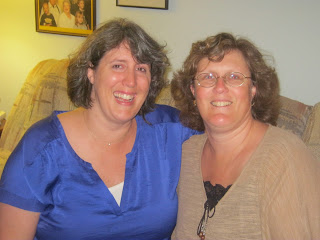 Enjoyed my trip home to see my visiting sister:)  We went with Dad to go get Mom's van from the shop, and  did some 'sight seeing' around town, since Wendy hasn't been home very much in the past 20 years. 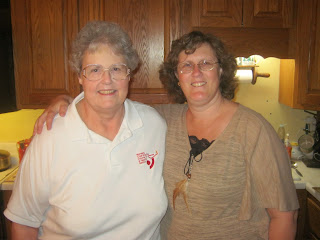 And here is my lovely mom:)  I suspected part of Wendy's trip home was to assess Mom's health, and I was right.  When Mom called me to tell me of my sister's trip, she also revealed she'd fallen twice the previous week.  No one had told ME, so that immediately set off MY alarm bells!  I'm three hours away by car; Wendy's an entire day away by PLANE!  It's a lot easier for me to drop everything and run up there, but at the same time, we're also on 'baby alert', as my daughter's due to give birth anytime in the next two weeks.

Have a good weekend:)  The full moon is this weekend, and many people are predicting Baby Alex will make her appearance on the 3rd.  I think it would be awesome for this child to be born on a Sunday, and exactly one month after my wedding anniversary, plus one month before her mommy's birthday.  June 3rd is also S's late 'Uncle Mikey's' birthday.  But you know what they say; babies come on their own schedule, not ours.  So keep watching this space; you never know when a new picture will pop up:)
Posted by Molly Daniels at 6:48 AM