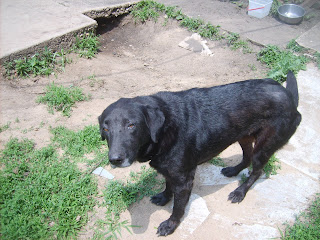 First of all, the GOOD news:
1) Received an email from publisher, requesting the full MS of Kenzie's Class Reunion, the sequel to All She Ever Wanted:)

2) Brynn's interviewing Kenzie today on her blog. Go visit her so she won't be lonely?

Fall 1998:
"Molly, you've just got to see which puppy Ashley picked out at the pound! She's adorable!"

Two years later...
"That damn dog keeps jumping over our fence and going out into the road. I'm taking her back to the pound tomorrow and having her put down. I'm tired of people telling me they've almost hit her."

"Nooooooo....let me have her! She gets along well with Shadow (our Norwegian Elkhound). We're getting ready to fence in a section of our yard...don't put that sweet dog down!"

"Okay; as soon as you're ready to take her, let me know."

One month later, I picked up a German Shepherd, confident I knew who she belonged to. The joke was on me: We'd end up keeping her! I thought I'd just blown my chance at Lucky, but to my surprise, my husband pulled up beside Lucky's owner and announced, "I should have the rest of the fence up by next week, and then we'll come get her."

(Molly breathes a sigh of relief!)

March 2000:
Lucky joins the family...and soon becomes known as 'Klepto' by the neighbors across the street! She would go over and play with their chocolate and silver Labs; drag bits of trash from their fire put; bring home horse bridles and whatever else she thought would make a nice play thing (she even brought home a dirty t-shirt Doug had laid over the stall door and forgotten!).

The neighbors would smile indulgently at her and go ahead and give her vaccines at the same time they gave their own dogs shots (they raised and sold the puppies produced by the chocolate Lab. Scooby, the silver Lab, would often get loose from his pen and come over to play with Lucky. 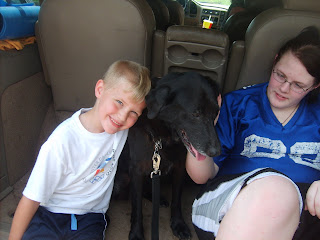 Spring 2001 or 2:
I was walking toward my kids' rooms around 7am to wake them up for school when I caught sight of Lucky in the road; another neighbor who was driving her truck waaay to fast; Lucky soon tumbling head over tail underneath the S-10 pickup and making a beeline for the woods behind our house.

I immediately turned around and went to the back door to call for her, but she wouldn't come. My neighbor knocked on the door, nearly in tears, apologizing profusely. I accepted her apology and went back to wake up the kids.

Later that day, we found Lucky frolicking down by her old owner's house (Maybe she'd had such a blow to the head she'd forgotten where she lived? LOL...), slightly battered, bloody, and scraped, but otherwise okay. We put her in the car and brought her home, cleaned her wounds, and called the vet, who told us just to watch her for any signs of seizures or vomiting. Neither one occurred, but I think she enjoyed the pampering and the love she received that evening!

May 2007:
We had to put our Shepherd Keisha to sleep; one week later, I dragged Shadow outside so he could do his business; apparently he'd been in the early throes of a heart attack because I found him an hour later exactly where I'd left him. So now was Lucky not only Alpha Female, she was Top Dog. Three weeks later, we discovered she DID know how to bark! Shadow had always been the 'voice' of all three, reminding us when we'd left them outside too long. 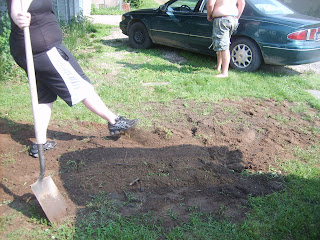 For the past several months, her bladder had begun to leak. We tried medication, putting her outside every two hours, or leaving her in the basement, but for a beloved family pet who loves kids and attention, not to mention the fact she was starting to have problems going up and down stairs, we felt it was an indignity she really didn't need.

She was thirteen years old; never knew a hungry day in her life; slipped off her chain and took regular laps around our neighborhood; tolerated the additions of two rats, a cat, and a cocker spaniel; and was bathed once a week. She enjoyed ten good years with us and is now happily hunting rabbits with Shadow. She will be missed, but she's no longer in pain.

And for me, that's the best part.

PS: All pictures were taken yesterday.
Posted by Molly Daniels at 5:31 AM

Congrats on the request. Will pop over to Brynns.

She's also playing happily with Scooby and Buddy, don't forget:) Scoob passed away two years ago, and who knows how old Buddy was when we moved.

Awwww. Hugs. It hurts so much to lose a beloved pet.

Amber: Yes she was:) We used to say that if anyone tried to break in our house, Shadow would sound the alarm; Keisha would be ready to kick their butts; Lucky would greet them at the door, wagging her tail apologizing for the other two and 'Let me show you where they keep everything...'!

Anny and Reg: I think once we get the basement cleaned up and Lucky's bed thrown away, as well as time, the loss will have less of an impact. One of W's friends came over yesterday; saw the empty dog bed, and burst into tears. And W this morning went out to her grave and said 'Goodbye; I'll be home after school'.

Kenzie: You're right! I'd forgotten about Buddy...

What a wonderful tribute to Lucky. RIP.

Hugs. She had a good life with you. And she brought love and laughter to your life, too. What more can any of us ask?