It's happened again; Paul's interview has been lost in cyberspace. Check out this excerpt, and if his interview arrives, I'll post it at a later date! 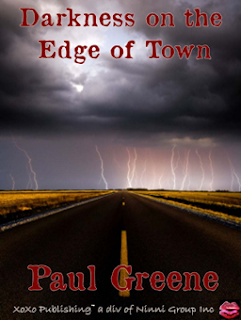 Baby this town rips the bones from your back
It’s a death trap, it’s a suicide rap
We gotta get out while were young
`cause tramps like us, baby we were born to run.
Bruce Springsteen – Born to Run, 1975

What a perfect day I thought as Springsteen blasted through the sound system in the
truck. The lake house will be a sight for sore eyes I kept reminding myself. I had driven
the past 4 hours straight and had only 30 or so minutes to go. I was running, escaping,
everyone knew it and I did not care. I had spent the last couple of years working what
seemed like 24/7. My down time was spent trying to clear my head in the concrete jungle
by walking my dog Tasha, a beautiful Malamute Husky or passing out from sheer
exhaustion. I had decided enough was enough. I needed some time away if not a
permanent change…I needed my little slice of heaven and my home on the lake was just
that. I needed to be close to the people that mattered most in my life, my two boys.

As I left the city behind, I thought of all the people, places and things I would
miss…it was a short thought. The people, places, and things I would not miss crept into
my thoughts and they took me much longer to review. Clearing my head, I told
myself...Out with the old and in with some fresh new perspectives. God how I needed
this! Tasha and I had not been up to the lake house in more than a year, almost two. I
could not wait and judging from her excitement as I turned on to the last stretch of
familiar highway, neither could she. Together we would relax, re-energize, and make
some decisions on the next steps, in the ongoing journey of ours.

As a homicide detective working the special crimes unit, I had been involved in
some of the cities worst cases over the years. My job had cost me a marriage, lost time
with my two boys, friendships and both my mental and physical health, hence the leave
of absence. The past three years had been especially difficult. I had been working with a
select group of detectives on a high profile serial case. Nine murders spanning 3 years all
committed by some lunatic that liked to play ritual games with his victims and the police.
He dropped us notes, left blood-painted messages at his crime scenes, made the odd
phone call to us on the task force and then there was his bizarre signature, ritualistic
killing style. I shook my head hard to lose the imagery.

All this and with the exception of some constantly evolving behavioral profile
bullshit from the department Psych Unit, we were no closer to catching this guy than we
were on Day One. He had gone into hibernation again as he did each September 22, one
day after his final kill of the year. He went silent from then until the first day of spring
each March. He told us he did not like the cold and added some bullshit about the
importance of the seasons changing and then he would disappear for close to 6 months.

Well, this time I was pulling the disappearing act. Spring was coming, the lake
would be beautiful and I did not have another season, let alone another day of this freaks
show left in me. I was positive he would start up again and I figured it best I leave now
before he got rolling. I wrapped up my files and transferred all my information to my
rookie replacement on the team, Sean Krieger. I then packed up my personal belongings
and put the few sticks of furniture I had in storage. It took me all of two days to put all of
my city affairs in order.

Today, Wednesday March 17 – St. Patrick’s Day, I loaded Tasha and our few
simple boxes into the truck and we left the city, the job, and the insanity behind. Tasha
has been with me for the past 9 years. She needed this return to the lake as much as I did,
maybe even more. “There’s the sign Girl,” I said...it read Wolf Lake 15 KM.

She sat up and I could feel her energy and excitement across the seat as her tail wag
speed increased. It was great to see her so happy! Walking her in the city doesn’t hold a
candle to the wild runs across the land we have out here and when spring and summer hit
she can’t get enough of the lake water! This will be great for the two of us. I felt the
darkness that had been my life for all too many years now, slipping away already.

Buy it here
Posted by Molly Daniels at 4:30 AM

I like how you weave in the story of the killer and his appearance and hibernation dates. Makes you wonder when he'll strike again...and if the detective will get any rest.