Sound The Trumpets! Something 'Wild' Is Out! 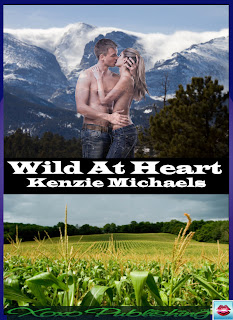 Turning my blog over to Kenzie now. I'll be back tomorrow:)

Thanks Molly:) She interviewed me last winter, so instead of going through the questions again, I thought I'd just tell you about the book and how I celebrated a bit prematurely.

Wild at Heart has the distinction of being my first ever manuscript. I was on my way to see my MIL when a news blurb on the radio concerning prison reform caught my attention. Imagine my surprise when all of a sudden a male voice popped into my head and started nagging me to write his story! I managed to hold him off until the weekend, and at a Boy Scout Family Camping Trip, I began writing. I got as far as the first chapter, and on September 11, 2007, decided to start typing it onto a word document. Exactly one month later, on October 11th, I finished it.

Took a two week break, and then joined NaNoWriMo and cranked out Teacher's Pet. Yep, I was on a roll...until the third week of November, when my brain shut down. Thankfully, it rallied and I managed to barely squeak over that 50K mark.

But anyway, it has been a long road for Wild At Heart. First of all, it had no title. Molly suggested a contest, but there weren't any takers. A few suggestions came in, but nothing really seemed to capture the spirit of the book. And then while talking about it to my mom, she suggested 'Call of the Wild'. I liked the 'wild' part; after all, Colorado is teaming with wildlife! And since it did have a romantic angle, the word 'Heart' entered my brain, and the title was born.

Here's the blurb and a spicy scene, since temps are falling in Indiana today.


Angela Clayborn has just discovered the man she sent to prison nearly two years before has been granted an early release. Torn between wanting to see him and fearful if she does, sparks fly when Steve Blumenthal appears in her gift shop and later at her condo. Will Angie free her heart from its icy prison? Has Steve really turned his life around, or is it a hoax?

Meanwhile, in Colorado on business, Angie’s current boyfriend, Brad Morrison, is wrestling with his own call of the wild. He’s met unconventional, sexy Emma Nichols, who runs not only her own riding stable, but helps out with her family’s woodworking store in Estes Park. Emma resents Brad’s offer to help during a family crisis, but eventually discovers that Fate sometimes sends people down unexpected paths to love. Can Brad tame a wildcat? Or will Emma settle for the safe path?


“I’m just going to say this.” His voice was rough. “I love you. You’re the one thing that kept me going, that kept me from going to Prison Tech 101. After I got clean, I decided I was going to do whatever it took to serve my time, and get a respectable job, all so I could win you back.” He cleared his throat. “God, Ange…I swear to you…that one dose of speed fucked up my future, but I’m not going to let it fuck up the rest of my life. I’m staying with Josh; I’ve got my driver’s license; tomorrow I’m buying a car. And my parole officer’s trying to help me get a good job, so I can afford my own place.” His voice dropped to a whisper and one hand stole into Angie’s bright tresses. His head angled toward hers and softly touched his lips to hers. When his tongue nudged her lips open and touched hers, she recoiled and dropped her head on his chest.

He lifted her chin with a finger. “It’s okay. I’ve waited nearly two years; I can wait a little longer.” He kissed her eyelids, her nose, and then her lips again before releasing her. “Thanks for the water and for hearing me out.” He stepped around her and left the condo, carefully closing the door behind him.

Once outside, he leaned against the wall by the mailbox, eyes closed. He was surprised Angie hadn’t locked the door. And suddenly she was outside with him, her arms around his neck.

Steve couldn’t speak. He gathered her up and moved into the condo again, pulling the door closed behind them. He kissed her, their tongues exploring and rediscovering each other.

His pent-up desire flared; he tried to keep it in check by remembering he’d never seen her undressed. His lips traveled all over her face; his fingertips traced the contours of her delicate features and the lines of her slender neck. His lips found her earlobe and grazed it with his teeth; he heard her inhale and moan when his tongue touched a sensitive spot just below it.

“I remember how you used to love this.” He gathered her hair in one hand and increased the pressure with his mouth.

“No hickies,” she gasped, clutching at his shoulders.

Steve laughed. Nothing new there. He moved to her jaw and traced her throat with his tongue, moving her backwards toward the couch. One hand slipped under her shirt and slowly skimmed upwards, hesitating before brushing against the gentle swell of her breasts. He eased her down onto the cushions and when she didn’t protest, he tugged her bra aside and closed his hand around her firm, small flesh.

Angie sighed and shifted; it was all the encouragement he needed. Raising her shirt, he bent his head and drew the taunt nipple into his mouth, reaching behind her back to find the bra clasp, Getting it unsnapped, the fabric fell away, and he filled his hand with her other breast, getting to know her all over again.

Panting, Steve worked his own shirt over his head and pressed their torsos together, feeling her breasts burn against his chest. He tongued both nipples, hearing her soft moans and the rush of blood pounding in both his head and his groin. He unsnapped his jeans with the uncomfortable pressure building, and managed to free himself. Holding his swollen cock with one hand, he unfastened Angie’s slacks and tugged them down over her hips, nearly losing it when he saw the transparent underwear and the ginger triangle beneath. He inserted a finger in the waistband. Angie bucked her hips; he peeled the final barrier down and stroked her entrance. She cried out at the contact, and he tugged both slacks and underwear to her ankles.

He brushed his palms over her mound, feeling the tension in her muscles and listening to her increased breathing. He reached behind him for his wallet and withdrew the blue-foiled packet. He waved it in front of her.

“Do I need this?” he asked, giving her one last chance to stop him.

Her damp hair was caught up in a silver clip, and dark blonde ringlets cascaded down her back. Her cowboy boots sounded firmly on the wooden floor as she walked toward the men, her slight frame in black jeans and a loose red shirt. Brad felt his mouth go dry when he realized there was no bra under that shirt, and had to keep tearing his eyes away from the glimpse of cleavage when she greeted Gavin. She slid into the chair beside the older man, and Brad shifted uncomfortably every time she leaned forward.

Emma reached for the hot wings Gavin had ordered and told the waitress to bring her a Coors.

“Gavin likes that crap, but I prefer to stick with Busch,” she stated as Brad shifted in his seat again. “Something wrong, Mr. Morrison?”

“Don’t they feed you back home?” Emma patted Gavin on the back. Brad swallowed at the sight of her nipples through the fabric and looked away. Keep breathing; remember Angie.…

“Actually, my girlfriend is quite a cook,” Brad managed to get his tongue working. He reached for a wing at the same time she did, and as their fingers brushed, Brad felt an electric jolt all the way to his groin.

Brad was spared by the appearance of the waitress, ready to take their orders. Brad and Gavin ordered the Prime Rib; Emma opted for the shrimp scampi. Brad ordered another beer, and then excused himself, hoping to get his raging hormones under control.

Emma, for her part, was enjoying Brad’s obvious discomfort. She’d left her bedroom in a cheerful mood and her confidence up, thanks to Bob’s worshipful and masterful handling of her body. Bob liked her without underwear, so she’d dressed for his benefit, not this stranger who thought he knew his way around an invoice.

“Emma, darlin’, what are you doing?” Gavin smiled once Brad was out of earshot.

“Doing what?” She ate the last hot wing and took another sip of her beer.

“You look like you just fell out of bed. And sweetie, I can tell there’s nothing under that shirt.” Gavin coughed. “I can’t believe I’m even having this conversation with you, but I need Brad’s company. And if you cause him to withdraw the deal, I’ll spank you, no matter if you are nearly thirty.

“I did. Are you shocked?” Emma had always been straightforward with her old friend. “And don’t worry; I’ll behave myself. I’m not a child anymore, Gavin.”

Emma laughed. “Oh Gavin, I love you. I had the same conversation with Nora yesterday, and she approves. Can’t you trust her judgment?”

I dressed up yesterday and had my hubby take me out to a modest lunch. I'm still thinking about going to my favorite bakery and having my release party at the bookstore with a small cake. I may have to turn it into a combination birthday/Christmas/Release party.

I hope my love of this story comes across, and I also have some (hopefully) humorous lines sprinkled throughout, concerning the wildlife in Colorado. Enjoy, and thank you for hosting me today Molly:)

I have my own page on Molly's temporary website, and hope to have my offical site up by the end of the year. In the meantime, I blog at least once a week over at Kenzie's Place.

Posted by Molly Daniels at 5:55 AM

Congratulations Molly sending your lots of support on your release day!
Gina

XoXo Pulse Radio
coming soon near you live on the internet! For more info:
http://www.facebook.com/pages/XoXo-Publishing/258678558724

Thanks Amber, Gina, and Barb:)

Wishing you many sales, Kenzie. Love the cover!