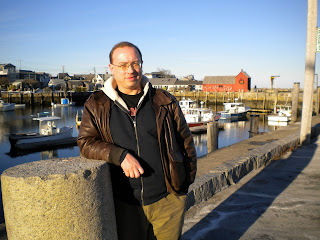 Glad to be here. I’m a horror writer from northern Virginia, about forty-five minutes from Washington D.C. I’ve written several short stories over the past few years, most of them zombie related, which have appeared in on-line publications or in anthologies from Living Dead Press (www.livingdeadpress.com). My first full-length book, The Vampire Hunters, was released in March 2010 as an e-book by Shadowfire Press (shadowfirepress.com) and in November 2010 as a trade paperback by Pill Hill Press (www.pillhillpress.com).

No. Most of my work is pretty intense, but I enjoy writing it. It’s cheaper than therapy.

Actual events, no. But I have incorporated some personality traits from family and friends into my characters, all in a positive way. I think it makes them more realistic. Anyone who knows me well will chuckle at my main character in The Vampire Hunters, Drake Matthews, who smokes cigars, drinks whiskey and iced coffee, and dotes on his pet rabbit. Unfortunately, though, I haven’t hunted down monsters for a living.

I do a fair amount of research, both before and during the writing process. Prior to writing The Vampire Hunters, I read several nonfiction books about vampires and from those developed my own mythos. Plus I’ve been fortunate to have met a lot of professionals who have been willing to share their time to educate me. There’s an autopsy scene in the first book that a forensic specialist reviewed and corrected for me. For second book in the trilogy, The Vampire Hunters: Vampyrnomicon, I was given personalized tours of the Washington sewers, the archives rooms of the Freer Gallery, and the mortician lab of a local funeral home that allowed me to flesh out the accompanying scenes in the book.

Nope. Life is tough enough as is without having me preaching to my readers. I just want them to pick up the book, tune out the world for an hour or two, and have a good time. And hopefully be so scared they sleep with a light on that night. 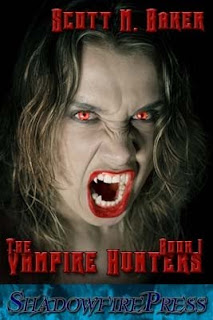 For short stories, I plot the whole thing out in my mind before actually sitting down to write. For novels, I usually draft an outline of keys plot scenes and character bios. But once I start writing, I inevitably add scenes and flesh out my characters.

As for my work taking on a life of its own, The Vampire Hunters is a prime example of that. The novel was originally intended to be a solo book. By the time I was done with it, I had developed so many ideas for plot twists and additional storylines that I expanded the concept into a trilogy.

I started writing The Vampire Hunters in late 2003. Shadowfire Press published the e-book version in March 2010, and Pill Hill Press published the trade paperback version in November. I used to think seven years was a long time to see my work in print until I started talking to other authors, publishers, and literary agents who told me the average time before getting a first book published is ten years. I consider myself very fortunate.

Hang in there, kid. It’s a long and ego-bruising journey, but it’ll all pay off in the end.

I started with a small notebook that I took with me everywhere I went, and would then transfer my stories onto my home PC. After The Vampire Hunters was published, I bought a laptop and my productivity spiked.

I do my best writing out on the back deck with a cigar and an iced coffee by my side. I also keep a pen and notebook handy at all times to jot down ideas and add to my “to do” list.

Joss Whedon has had the most influence on my writing. His plot and character development are superb, especially with Buffy, The Vampire Slayer. But what really impresses me is the way he can inject humor into the most intense scenes and still make it work. 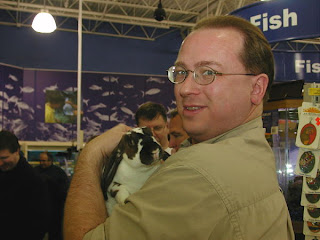 My colleagues at work get the biggest kick from the fact that while I write some of the goriest scenes they have ever read, in my free time I like to work with the Loudoun County Animal Shelter and local rescue groups saving rabbits. I am the human servant to six house rabbits at home, and most of them came to me from abusive or neglectful situations.

My mother’s birthday falls around Thanksgiving. One year my sister through a surprise party for her. I drove from Washington to Boston to be there. She was so happy she cried for half an hour.

We always set up the Christmas decorations the day after Thanksgiving.

Pumpkin pie with a huge mound of whipped cream.

The best place is my blog, Scott M. Baker (author) at www.scottmbakerauthor.blogspot.com. I have links to my short stories that are still available on line (“Incident at Ironstone Lane” and “Rednecks Shouldn’t Play with Dead Things” in Necrotic Tissue’s autumn 2009 edition), plus links to purchase the print anthologies my stories have appeared in as well as my full-length books. I frequently blog about status updates, upcoming book signings, and other items of a general horror-related interest. You can also find links to follow me on Facebook and Twitter. 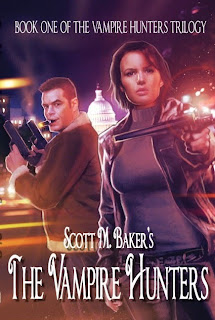 
Modern day vampire hunters wage a brutal battle against the undead in the nation's capital.

As former Boston cops, Drake Matthews and Alison Monroe thought they had experienced it all... until they found themselves tracking down a serial killer who turned out to be one of the undead. Stopping him cost them their careers and almost their lives.

Thanks to an influential and anonymous benefactor, Drake and Alison find a new job ridding the streets of Washington D.C. of the vampiric threat terrorizing the nation's capital.

Only this time, Drake and Alison are not facing a single vampire but an entire nest led by Ion Zielenska, one of history's most evil and twisted masters. As the vampires indiscriminately prey on humans, seeing them as nothing more than food to satiate their hunger, they create a wave of violence that threatens to engulf the city. Orchestrating the carnage is Antoinette Varela, the mistress of the nest, whose vendetta against the hunters is personal.

As the adversaries faced off, the train pulled into Foggy Bottom Station. The passengers practically pulled the doors open to escape. When the doors finally did open, they ran out onto the platform and dashed to safety. Seconds later, the doors slid shut and the train began to pull out of the station.

"That suits me fine." Toni hissed and sprinted down the rail car.

Alison pushed off the deck with her left foot and spun her body around, slamming her right foot into Toni's head in a tornado kick. The master careened to the side and stumbled between two rows of seats, smashing the window, momentarily stunned. Pulling a stake from her belt holster, Alison ran between the seats and raised the stake to inflict the fatal blow. Toni's hand shot up and grabbed Alison by the wrist. With one thrust, Toni threw the hunter over three sets of seats. Alison landed on her right shoulder in the opening by the doors, sliding across the deck until her back slammed into the center pole.

Toni flew over the seats and landed on top of Alison's chest, knocking the wind out of her. The master pushed herself down on Alison, pinning the hunter's pelvis to the floor with her own, then ripped open Alison's blouse to expose her neck. Bearing her fangs, Toni leaned over, pausing only inches from the Alison's neck.

"Not if I have anything to say about it," a voice shouted from behind Toni.

Toni looked up to see Drake standing at the opposite end of the car. She snarled. "You have nothing to say about it. She's ours now."
Posted by Molly Daniels at 4:33 AM

Thanks for being with me today Scott:)