What A Week That Was!

Currently Reading:  Finished Safe House, and my only comment is, when did the heroine sleep?  I was exhausted by all the amateur-detective-ing.  This is WHY the police are there; let them do their job!  It drove my crazy in some spots because a worried mom couldn't sit still and 'do nothing' while everything around her fell apart.  And it turned out she was wrong anyway.  But hey....if the mom hadn't done anything, then there wouldn't have been a story....

Next up:  Winter Interlude by Sandy Lloyd.  I can see where this is headed, and can't wait to see how everything works out!

Print:  Finished Full Cupboard Of Life and In the Company of Cheerful Ladies.  I was disappointed there wasn't more 'detective work' going on in these, as did the others in this series.  I do want to read the next book in this series though.  The blurb has me curious.

Next up:  Stranger in the Moonlight by Jude Deveraux.  Apparently this is the 2nd book of a trilogy; I'll have to get the 1st one also.


I'm amazed I don't have a swelled head from last week.
Mon:  Shook loose from not-so-great publisher
Tues:  Found out new projected release date AND I'm going to have my favorite editor back
Wed:  Filled out interview for ARE, plus Off The Clock was accepted
Thurs:  Received release date for Class Reunion
Fri:  ARE Interview went live

I made the family take me out to dinner Friday night.  Last week was cold, miserable, and windy.  But I felt my 'adrenaline wave' earned the right to be uncomfortable for a few minutes.

Then on Saturday, my youngest had his basketball tournament.  His team was 6-2, and while we were on a winning streak, the boys on his team had been sick at one time or the other, and even practice had been cancelled on Thursday, due to 4/7 boys being sick.  But Saturday at 1, we had six players ready to go.

Next up, a team who'd beaten us quite soundly the one time we played.  Our boys hung on to win, 16-10.  Now a fifteen minute break and on to the championship game!

At first it looked a little bleak.  This team had also beaten us rather soundly, so we were hoping that fatigue all around would at least make the score close, and not a runaway.  The other team led at halftime by six points.  But in the 4th quarter, we suddenly surged ahead.  And won, 39-34. 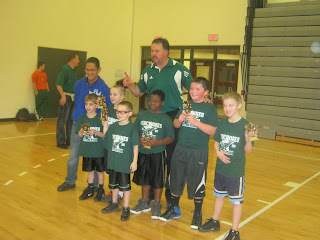 Yesterday was low-key.  I edited; daughter and granddaughter arrived to do laundry; I was able to watch my shows LIVE for a change.

Not sure what this week holds.  I'm setting up intervews/guest spots for Kenzie's release date next week, so stay tuned!