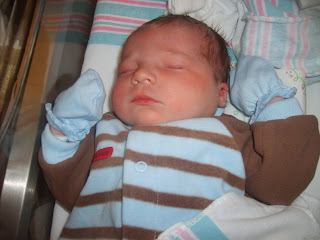 First of all, baby Shaant (hereafter known as Shaun) officially turned one day old as I was holding him last night:) Sam and baby are doing well, and the shock is beginning to wear off for Anthony. I saw pictures of him earlier and he had that deer-caught-in-the-headlights-look about him. 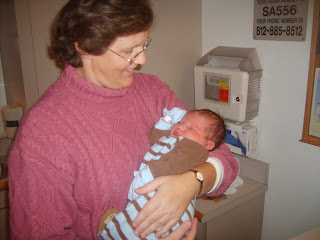 I think he likes his Aunt Molly; he was cooing at me in this pic! When I first picked him up, he objected to being snuggled against my chest. He quieted once I cradled him, so I think we're going to get along fine:)

Professional:
-To finally join my fellow authors in being e-pubbed Yes!
-To publish #3 in my series, Forbidden Love No...
-To not be so obsessive about my blog posting. Yes!
-Attend 3 conferences this year. I may not make it to RT, but there is still Lori Foster's, Midwest Writer's, and the EC Romanticon. No...didn't even make it one!
-Set up at the 3 craft fairs I missed last year, and do as many as the others as I possibly can Not possible, due to K's football schedule
-Set up signings in other towns' bookstores, now that the gas prices are down. Sort of...we'll call this one inconclusive; I did set up at one in another county!
-Finish a couple of wips before beginning any new ones Again, inconclusive. I finished one wip, but also began another project and finished it.

Personal:
-Walk more. June '07 I was walking 4 miles a day...and promptly discovered reruns of Dawson's Creek, which quit after Labor Day. I never did resume that habit, although I walked twice a week during April and May with the Head Start moms. Why did I not keep at it? Sheer laziness. No; started off with good intentions, but a pain in my foot revealed arthritis and then I caught bronchitis. Motivation sort of shut down.
-Mantain current size or drop one. I do not wish to expand, so the eating habits will change slightly. Yes:) Maintained current size.
-I have a major battle ahead of me, as a family member is in need of intervention. This came to my attention back in October, and as soon as a meeting is called, it will take a great deal of courage and inner strength to stand my ground with this loved one. More on this at a later date; I'll be asking for prayers! Yes! Problem seems to have resolved itself:)
-Dakota challenged us last year to do something nice for ourselves. I finally had my hair done and my eyes checked; this year it will be a trip to the dentist and my doctor. My pre-menopausal symptoms have gotten worse this year, and I need to consult with the doctor who's known me for the past 17 years. No; blew this one. I did get my hair cut twice this year, but failed to visit the dentist or my 'real' doctor.

So I've decided to post goals instead:
-Continue to write and submit
-Attend at least ONE professional conference next year, hopefully RomantiCon
-Do as many signings as I can
-Get back into the walking habit and maintain current size or drop a few pounds.

Ch-ch-changes....
Beginning this month, I'm going to host Terrific Tuesdays With....and will interview authors or host guest bloggers. I've had so many requests, I'm booked through July, so if you've not been contacted, or know you have a release next summer, email me at storimom2@aol.com and I'll get you scheduled.

More pictures are ahead, as my oldest goes through his Eagle Scout Ceremony and Graduation. And yes, when we pack him off to Purdue, expect some weepy Mom Moments...

Fridays are going to be Flashback Fridays, where we can share memories of years past. Saturdays will still be the Stupid Sayings, as well as the occassional Snippet, now that I know how to copy and paste to blogger again! (Aren't you proud of me??? Now if I could just figure out how to post the videos!) And I'll probably take Sundays off again. And since I'm getting long-winded, I'll post the January Reading/Buying schedule tomorrow.

Kenzie's Korner
Now that Kenzie has a contract, she'll be blogging here and there about her editing progress, so be sure to watch her blog at least once a week. I'll be sure to post the link whenever anything exciting happens, such as the cover or release date!

So Happy New Year! May 2010 be a productive one for everyone:)
Posted by Molly Daniels at 4:12 AM

Oh, what a handsome little man. He's adorable. I just got myself a new nephew this week too. Benjamin was born on the 30th. I've still yet to meet himt though.