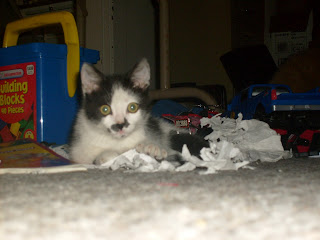 Hubby and I are on the same wavelength; I decided about three hours ago to spend the morning hours deep-cleaning my living room. About thirty minutes ago, he pointed his finger at me and told me not to get on the computer as soon as the kids went out the door, for we were CLEANING up the place!

And he claims he doesn't listen to me. Apparently THAT statement managed to manifest itself into his gray matter! And he thinks it is HIS idea??

Currently Reading: I'm up to Chapter 3 of Dee's book. It switches POV quite often and was slightly confusing at first, but I'm getting used to it!

Posted by Molly Daniels at 7:28 PM

Thanks Barb; we think so!