A friend of mine needed a sitter this past weekend, so little C joined us for a day at the fair. I think she and W enjoyed themselves... 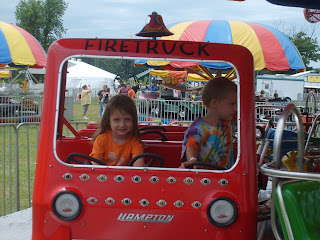 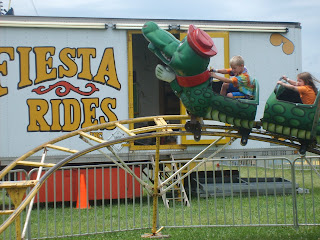 The Dragon Coaster (W rode this twice; both times in the front seat!) 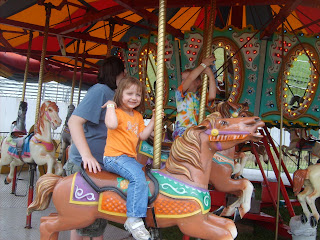 S rode the merry-go-round with them six times in a row! 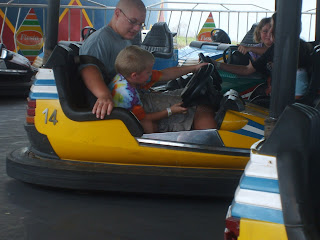 If you look closely, you'll see W is 'driving' his big brother K. 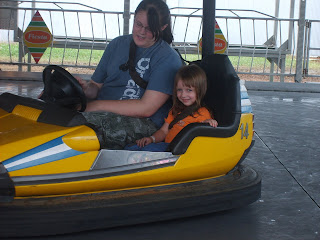 S and C. Due to their line placement, the kids couldn't ride this at the same time, and C had no desire to attempt it again (she's a little shy). 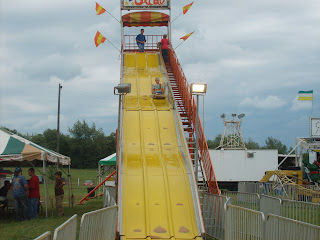 This was W's favorite ride last year! I think he went down it only three times this year. 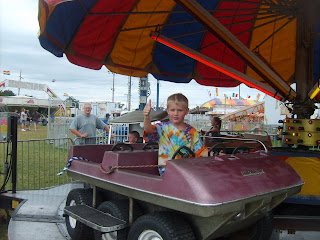 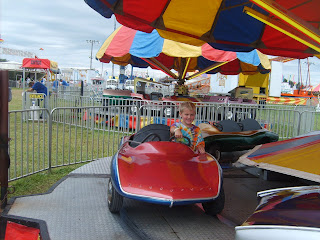 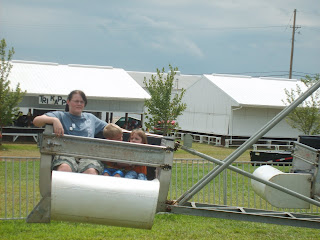 We all rode the scrambler; you can just see W and C's heads. The second time, I took C on the scrambler while S and W went on the Tornado. Later, I bought three more tickets so I could go on the Tornado with S. And she discovered Mom likes to spin! In fact, she had to tell me to stop turning the wheel at one point; she was getting too dizzy. 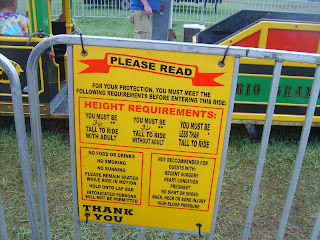 I took this one because it struck me funny. This was posted on the kiddie train ride, and if you look closely, it says 'intoxicated persons not permitted' and 'Not recommended for pregnant people'.
Reality Show Update:
Next Food Network Star judges had a tough decision Sunday night: Debbie the 'Soul to Seoul' chef or Jeffrey the 'Cooking without Borders' chef. I think Debbie's integrity problem caught up with her, and she was voted out. Like I said last week, I think Melissa has a shot at winning this thing.
Big Brother, on the other hand, is a no-brainer. If they don't get rid of Ronnie this week, they're going to regret it. We'll see what happens tonight at the Veto Challenge.
Patience Has Paid Off!
Remember my falling out with a friend last month? We met for coffee and all is well again!

Posted by Molly Daniels at 4:27 AM

Looks like lots of fun was had! I loved those potato sack slides when I was a kid - way back when. :)

Fighting with a good friend is tough, glad you were able to reconcile.

Glad you had fun, Mom!