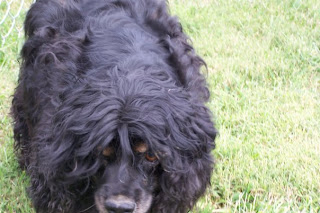 This is our rescue pet, Roxie, taken two weeks ago. She's 6 or 8 years old (owners say she's six, but with all the gray on her chin, we think she's closer to 8...Vet will tell us later this week.) and is a black cocker spaniel. She looks like a little black lamb in the above pic; her old owners kept her in the backyard, fed her when they remembered, and generally neglected her. Roxie was rescued by my friend J, who has been trying to get her for two years and finally succeeded. Despite having to live in deplorable conditions (a muddy back yard, no interaction with anyone, and obviously no grooming), she is the sweetest, most loving animal. J and my daughter worked for ten hours giving her baths, clipping away the matted hair (she was so matted underneath, her legs were 'webbed' to her body. She's basically learning how to walk again!), and showering her with attention. 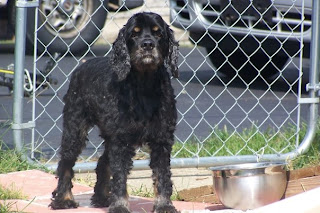 This is Roxie last week. Big improvement, huh? After being groomed, J discovered she had a broken rib and pieces of a screen door digging into her chin, caught in the matted hair. But after two days, J could no longer keep her.
She was food aggressive; J has three other dogs, all smaller, and the food is kept out for them to get a bite whenever they want. Roxie would snap and growl if any of the others came near the bowl. Finally, J got Rox her own bowl, and the problem subsided...somewhat.
J also has two cats. Rox liked to chase them, to see them run. She and the Alpha Dog also got into it, but it turned out to be simply a 'wrestling match', with no fur flying, no biting...just a lot of noise and rolling around. Nonetheless, it got on J's nerves, and since S had fallen in love with Roxie, we agreed to try her out for the weekend. There were issues of a) would she and Lucky get along; b) How well would she do with a five-yr-old; c) How would she interact with Oreo, the cat; d) how she would react to my husband's beard (her old owner had one, and it had taken several days to warm up to J's hubby, even with no facial hair!).
We went to get Roxie on Saturday. D fell in love with her, as did W. She and W bonded and were happily running around J's back yard. She reacted well to the leash and harness, although we switched her to pretty pink collar. She shivered the entire ride home, but did okay.
Lucky sniffed her when we brought her in the house; no aggression was present. Good; hurdles A and B were overcome. The cat came in; he rubbed up against her; she didn't react. So far, so good. And Sunday morning, D reported she laid her head on his knee and let him pet her. Soon she would nudge his hand and move forward, so as he scratched, he went down the entire length of her body.
And when we left for church, the cat was in the chair; Lucky was in her corner; Roxie was curled up in front of the TV. An hour later when we returned, Oreo raced out of the house as if to say, "You left me in the house with two dogs! I'm outa here!"
Later, when K fet Pinky and Mikey (rats), he left the cage door open while he untied the food. Roxie started shaking, and had to be consoled. Apparently the night before, she'd gotten curious about the cage and put her nose up to it. Pinky stuck his head out; she jumped back and ran the other way! Will we soon have a Pinky/Mikey/Roxie Comedy Hour? Stay tuned!

Posted by Molly Daniels at 7:19 AM

What a darling dog!

It always warms my heart when people rescue animals. She's beautiful! Hope all continues to go well for everyone.

Well done. It is heartbreaking to see an animal hurt and neglected. Even though the new affection make her happy, the fact that she has to adjust at all is wrenching. Poor Roxie. Sounds like she found a new home with a new loving family.

Now if she'd just eat her own food...