At any period of time when you lost consciousness or don't remember what happened, did you see the car change direction or speed?
lawyer asking witness a question, in an actual courtroom transcript

Word Count: Actually managed 750 yesterday:) A page and a half! And then we decided to travel to the game...

Last week, I was finally able to capture my football player running onto the field! He's #62., just past the cheerleaders to the right, and before the banner. 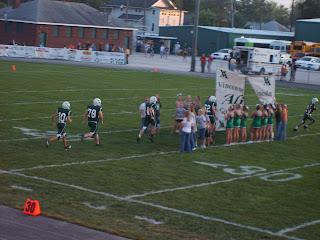 For reference, again if you're a regular reader of this blog, our football team has been on a serious losing streak. We've had two games where we've scored zero points (one being because of an unfair penalty call!) and the others where we've scored only one touchdown. And usually only in the last quarter (you'll recall K's being part of that offensive line last week!)

Here's what happened last night, in the first six minutes of the game: 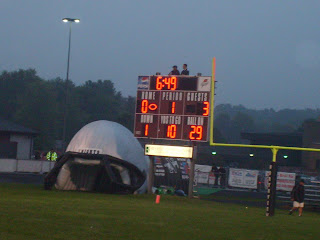 We just couldn't get the ball into the endzone, but we DID kick a field goal! Not bad for a team who hasn't scored first all season:) 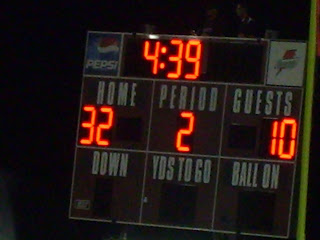 In the second quarter, we finally managed a touchdown AND the extra point!

This is a random shot of our side last night. Mother Nature sprinkled/misted on us throughout the entire game. Surprisingly enough, it quit during halftime, but resumed just in time for the 3rd quarter! Just enough wetness to drive you nuts...and drink lots of coffee! 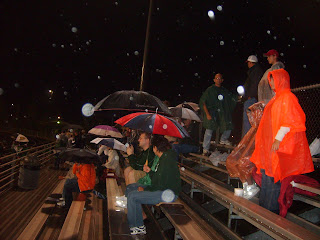 And with two minutes to go, we actually managed to score again! No, K didn't get to play, but 'my other kid' (another player who has sort of 'adopted' me) was out on the field for the final play of the game...and was shoved after the whistle. Guess who the refs called the penalty on, with about six seconds to go? You guessed it; US! I guess they have different rules in the third county north of here too. 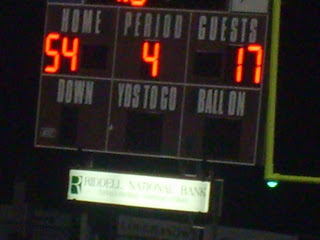 I'm proud of our team. Yes, we're losing, but the point spread is getting closer! Next week is Homecoming. I hope the game is exciting.
We have an interesting week ahead: Some friends from California are arriving tomorrow, since this is R's 30th HS reunion. He was my spouse's Best Man at our wedding, and since we don't get to see he and his wife very often, my hubby is looking forward to spending a week with his best friend. I won't be able to do a great deal of writing this weekend, as we will be doing a massive Operation Clean House. R & S will actually be over to see us on Monday, as they won't arrive in town until late. This is one good thing to come out of the spouse's lay-off; quality time to spend, instead of cramming a year's worth into a day or two!

Posted by Molly Daniels at 7:25 AM

My hubby was a football player in high school and I was on the Flag Corps. We went to rival high schools. Our two teams were the worst in our league. I can't remember if his or my team won the last time we played each other (while we were seniors), but it was a well-matched, exciting game. Hubby had fun playing and I had fun doing half-times. Isn't that what matters most? :)

Yay, they scored more than once! That's excellent progress. Tell them to keep at it. I may not be there in person but I'm rooting for them in spirit.

Have a good weekend.