Currently Reading: Loved, loved, LOVED Barb's Second Act!!! I think this one is definitely my favorite of the ones I've read. Definite Recommended Read! I'm also up to Ch 8 on Fran's Dictated By Fate, and I'm also thoroughly enjoying it too! Another Recommended Read! Good job, ladies:) 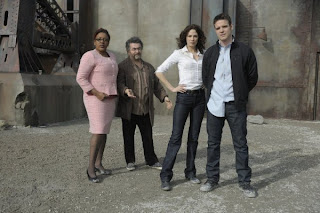 July means the beginning of another season of two of my favorite SyFy shows:)

First is Warehouse 13, a show about a secret government warehouse which houses all sorts of paranormal artifacts. I was really happy to learn there would be a second season, and last night's premier was awesome! I can't wait to see what happens next week! 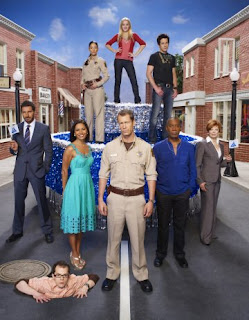 Eureka. I got hooked on this show last year, during a marathon of Season 2. We DVR'd it last year and laughed every Friday night at the antics of Fargo, Zoey, Jo, and Sheriff Carter. I've already seen a promo of 'The Fargonator', in which Fargo returns from the future ala Terminator-style'.

Big Brother is my guilty pleasure. Some seasons I catch every episode; other years are hit and miss. I habitually skip the Sunday shows, and last year we tried to watch the 'After Dark' episodes, but quickly found them rather boring, except the ones in which the challenges ran over. Then we knew who won HOH and didn't have to wait two more days. 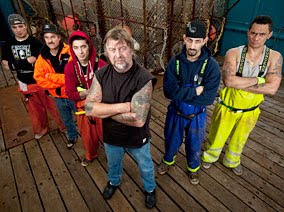 And finally, I've been hooked on Deadliest Catch ever since the end of March, when we caught a marathon while my SU was in the hospital. I've watched every episode of this season, and even though I know it's silly, I've found myself shedding tears over the death of Captain Phil Harris (black shirt, center). Next week there's a two-hour show as he loses his battle, and during the previews after last night's episode, I wept like a baby for his two boys.

Of course, that could just be my own grief trying to manifest itself. My MIL is losing her battle. We went out to see her on Monday and she looked worse than I've ever seen her. My SIL came down, and with her 25+years of working in nursing homes as the Activities Director, she thinks if Mom lasts two weeks it will be a miracle. So we're pretty much spending several hours a day by her side. And D isn't handling this well at all. It's hard to see a loved one suffer and slide downhill. So keep them in your prayers please?
Posted by Molly Daniels at 4:53 AM

Molly I'll be keeping your family in my thoughts and prayers. Hugs.

Oh honey, I'm so sorry about your MIL. This is so hard.

Many hugs dear Molly. You're in my thoughts.

And thank you for the recommended read. I'm so happy you liked it!