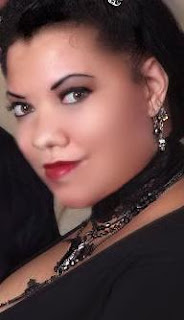 Welcome! Please introduce yourself and tell us about your latest release.
Hi Molly, and thank you so much for having me here! I’m an author of Dark Paranormal Romance and Horror, with a flair for ‘dark humor’ every now and again, lol. I’m also Editor/Publisher of Dark Gothic Resurrected Magazine. 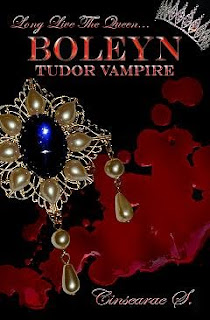 I’m pretty hyped about BOLEYN-Tudor Vampire, as this is my very first ‘period-piece’, something I’ve always believed I wouldn’t be able to do quite right, lol. In the end, it wasn’t all that hard to do after all, lol.

Tweaking parts of Tudor history, I came up with the idea to make Anne Boleyn a vampire after watching the first three seasons of Showtime’s ™ The Tudors twice. There was something about the unfairness of Anne Boleyn’s convictions that kept nagging at me to have her get some type of revenge. I have her being hanged instead of beheaded, so she’ll be able to exact that revenge. Her brother and Mark Smeaton also join her in her crusade to keep Whitehall Palace in a state of unrest, and there’s a twisted romance between her and Thomas Wyatt. Even so, there’s plenty of gruesome scenes to entertain any horror fan! *grin*

Have you incorporated actual events from your own life into your books?
A little here and there, but mostly the humorous situations. They were so quirky, I bet if folks read about them, they wouldn’t realize that they actually happened, lol!

Have you ever had an idea for a story which scared you after you began writing it?
It was a demon possession story that I can’t even remember the title of. I couldn’t even finish it. It’s several years old now, collecting dust waaay in the back of my filing cabinet.

How much research do you do? Do you research first and then write, or do you write first, then research as needed?
It depends on the type of subject matter that comes across in each story. If I’m lucky, I might not have to research at all. If I do, I just go back to do a bit of light re-reading to make sure I have things straight; even still, I like to embellish a bit to make things more interesting… *grin* 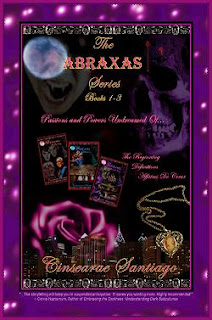 Is there any message you want readers to take from reading your work?
For my ABRAXAS series, it pretty much goes like this: Life may be a bitch, but you can always overcome any crap that’s thrown your way with a bit of teamwork and a supportive family.

Are you a plotter or a pantser? And have you ever had a story take on a life of its own?
I always start out as being a pantser, lol. Then the plot unfolds itself as I keep going. My first story that took a life of its own by becoming a series was ABRAXAS. I’ve done four books revolving around a world of a different type of vamp, with very real and unreal situations that they deal with constantly, and I’m working on the 5th installment as we speak!

How long did it take for you to be published?
I can remember being first published in small press magazines and anthologies in the early 90’s via short stories and poems, even some of artwork. It wouldn’t be until the early 2000’s that I started publishing novels.

If you could go back and tell yourself anything when you first began your writing career, what would you say?
“Stay away from the negative people around you, especially the ones that DON’T want you to continue in this endeavor. Start looking for like-minded folks who are into the same things you write about, and make connections with other authors!”

Laptop or pen and ink? What are your ‘must-haves’ when writing?
As far as ‘most trustworthy’ is concerned, pen and ink. I always carry a notepad and pen with me, since my muse is known to strike at any given time. I also keep both by my bedside, since there have been times I’ve had parts of a story come to me as soon as I wake up. When I’m typing everything down, I save everything periodically and also have a backup drive. Years ago, I was in the middle of typing a short story, and my PC decided to have a hiccup-burp-fart and crashed. Naturally, the story was lost, and I bet the neighbors a whole block down heard me scream. I almost swiped the entire PC off my table. Lesson learned!

Who are your favorite authors? Who would you say influenced you the most?
King has always been my favorite author, and he was definitely a big influence on me. I was reading his stuff ever since junior high, and he was also partly my reason for wanting to be published in the horror/paranormal genres in the first place.

What would your readers be surprised to learn about you?
I think many readers already know about my ‘Exorcist’ story, so here’s another one. I love hamsters, and mice don’t phase me either, as I’ve had both for pets. But I can’t do rats. I’m not scared of them, but I’m afraid they’ll bite me if I try to pick them up. Pretty ironic, don’t you think? Lol!

For Fun:
Favorite Fourth of July tradition?
I usually spend time with my family, as my dad loves to cook. (Hey, if I don’t have to cook, all the more better, lol, but I still help him out a little.)

Mountains or Beach?
I might have to go with ‘beach’. I love the woods and all aspects of nature, but I really don’t need Mr. Hack-n-Slash trying to get me in my sleep while I’m camping, lol.

Any Summer Festivals you like to attend?
I love summer, but hate melting, lol. Summer festivals that are open in the evening are pretty rare, so I don’t attend many, lol!

If you’re writing a Christmas-themed story, how do you get ‘in the mood’?
Christmas, sad to say, is my least favorite holiday. I lost my grandmom in the month of December, and my mom during the spring. Even though it’s been a few years between them both, their absence is still felt around that time of year. I haven’t really been inspired to write a Christmas themed story except for last year, a free read from my ABRAXAS series. I tried my best to focus more on my secondary characters and not the main one, as I found a lot of my true feelings about Christmas leaking out on her. I did give it a happy ending, though.

Thank you for being here today! Please tell us where we can find your books.
And thank you again, Molly! It’s been fun. Folks can visit my website and find links to ABRAXAS and BOLEYN there. They can also visit here or here for special free reads.
Posted by Molly Daniels at 4:09 AM

Loved the Boleyn story! I know there's no chance for a sequel but anything else planned along those same lines?

Thanks for being with me today Cinsearae:) The Tudor one sounds fascinating!

Thanks for having this author Molly! Her work sounds really interesting. I'm assuming she has a blog I can follow? Details/addy? :)