Welcome! Please introduce yourself and tell us about your latest release.
Thanks. I’m thrilled to be here today!

My latest release is Eternal Love, from Pink Petal Books. Eternal Love is my first paranormal romance. Rhys Trevellian, a 935-year-old immortal, has been in love with the same woman since childhood. Unfortunately, she’s mortal, and has died and been reincarnated eight times since her first lifetime with Rhys. Each time she reincarnates, he has found her only to see her murdered by the Purists, a fanatic group of immortals.

When Rhys meets Gwen Davies, he immediately recognizes her as his love’s newest incarnation, and sets about earning her trust in the hope that this time, he’ll be able to transmute her to immortality so they can spend eternity together. But they’re forced to run, not only from the Purists but also from the immortal authorities who seek Rhys for murder and from Gwen’s abusive former fiancé.

Have you ever had an idea for a story which scared you after you began writing it?
I have. It’s a short story I posted online but which I’ll never try to publish. Way too disturbing.

Have you incorporated actual events from your own life into your books?
Occasionally, yes. In Pink Petal Books’s recent wedding promotion, my short story “Beginning Again” pretty much exactly detailed my own wedding ceremony. Some comments, bits of dialogue, and even *whispers* sex stuff in each of my stories has basis in reality, though it’s usually just a snippet here and there, not an entire event.

How much research do you do? Do you research first and then write, or do you write first, then research as needed?
I don’t research if I can help it. Hate researching. I’d rather be writing. So I usually try to choose plots that won’t require research (for example, I’ll never, ever write a historical), and if I need to look up something minor, I do a quick web search as I’m writing.

Is there any message you want readers to take from reading your work?
No matter what’s happened in your past, it’s the present that’s important.

Are you a plotter or a pantser? And have you ever had a story take on a life of its own?
Mostly a pantster. I get an idea for a story and may write down a sentence or two so I remember what I’m writing, then I just run with it. Occasionally I need to do a little more brainstorming than that, though. For example, with Eternal Love, I had to make some pretty extensive notes because there were a lot of plot points and traveling within the story, and I had to keep them all straight. My stories often take on a life of their own, though, even if I do make notes about them, and I usually go along with it. Sometimes the characters have better ideas than I do.

How long did it take for you to be published?
You mean from the time I started writing? That would be about 26 years… I started writing when I was five. Started submitting things when I was 16, so it would have been 15 years from there. I got my first contract when I was 31, for a phonics-based reading program I wrote.

If you could go back and tell yourself anything when you first began your writing career, what would you say?
Again, that depends on what we consider the start of my writing career. If we say I started my career when I was five (by which time I knew I wanted to have my stories in books), I’d just tell myself to keep working at it.

Laptop or pen and ink? What are your ‘must-haves’ when writing?
My desktop computer. I don’t own a laptop. I have a netbook, but the screen and keyboard are too small for me to really get into the flow of writing.

Who are your favorite authors? Who would you say influenced you the most?
I can’t answer that… I like a variety of authors, and really can’t pinpoint any particular one as my favorite. For influence, I’d have to say Lex Valentine. She took me aside when I started the e-publication journey in early 2009 and gave me a few truths about the industry and where I should aim with my talent.

What would your readers be surprised to learn about you?
In spring of 2005, I reached a weight of 150 pounds after starting in July 2004 at 250 pounds.
(Molly's jaw hits the floor) That's AWESOME! I need that kind of willpower:)

For Fun:
Favorite Fourth of July tradition?
It’s a new one, just started last year. My husband works for a marine assistance company in Boston, and is allowed to bring us out onto the Charles River so we can watch the Boston fireworks and listen to the Pops.
That's sooo cool! I watch the Pops every year on TV, but I bet it's even better in person!

Thank you for being here today! Please tell us where we can find your books.
Thanks for hosting me! You can find out more about me on my website, My books are available from Pink Petal Books, Noble Romance, and SirenBookstrand, as well as on AllRomanceEbooks and Amazon.com. And a few other places that I unfortunately can’t recall at the moment… 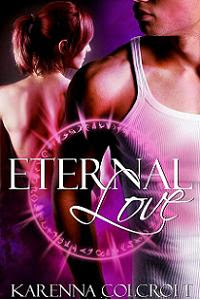 Blurb:
For over 900 years, immortal Rhys Trevellian has been in love with the soul of the same woman—his childhood love Gwen. Unfortunately, Gwen is mortal, and Rhys is unable to keep her with him. When he meets Gwen Davies in a coffee shop in his newest hometown, he immediately recognizes his lost love.
Gwen Davies has had a rough life, most recently having to run from her hometown to a small town in Maine to escape her abusive ex. In Rhys Trevellian, she recognizes something that strikes a chord in her. Although she has no memory of the lifetimes he claims she’s shared with him, she knows he’s her true match.
To remain together forever, Rhys and Gwen must escape those who seek to murder Gwen before Rhys can transmute her to immortality, and those who seek to execute Rhys for crimes he didn’t commit.

Excerpt (not final version)
Gwen and Rhys each visited the bathroom to wash their faces and clean their mouths, though they couldn’t brush their teeth since Rhys had left everything in the car. Once they both had returned to the bedroom, Rhys stripped off his shirt and pants, and watched as Gwen did the same. She was so beautiful, her movements so graceful. His cock twitched at the sight. Despite his fatigue, he wanted her badly. After so many centuries, he couldn’t have enough of her.
She needed rest, though, and he would let her have it. They would have other times to make love. Sleep was more important.

Apparently, she had other ideas. Wearing only her panties, she walked over to him and put her arms around his neck. “How tired are you?”

He grinned. “I could be persuaded to stay awake a bit longer.”

She glanced down at the front of his briefs, which bulged with his now-hard cock. “I don’t think it will take much persuasion.”

“Probably not.” He traced the curve of her jaw lightly with his thumb. “Are you sure you aren’t too tired?”

“I need to feel you,” she whispered.

He held his arms outstretched. “Then I am all yours.”

She knelt in front of him and pulled down his underwear to let his cock free. She ran her finger down his shaft then cupped his balls. “I want this,” she purred lustfully.

“I said I’m all yours,” he said hoarsely, shivering at her touch. “Do whatever you want. Tell me what you want me to do.”

She tilted her head to one side and looked up at him through her eyelashes. “I want you to stand here until I’m done, then I want you to fuck me,” she commanded. “I know it’s still making love, because we love each other. Tonight, though, I just want to be fucked. I want to wipe everything out of my mind and just feel you.”

Her words filled with desperation, stabbing Rhys through the core. Because of the need to run, he’d been so selfish with her. Rather than trying to help her process what had happened, he’d acted as though nothing much had. He should have made her talk to him rather than letting her suppress everything. Now her mind had overloaded.

He stroked her hair. “Gwen, I can’t help you forget,” he said softly.

“For a little while you can,” she pleaded. “Rhys, I love you and I want to be with you now. I don’t want to forget it all forever, just for now. Just long enough that I can sleep without dreams. Please.” She paused. “I need to forget, and I need to know that we’ll always be together. I want you to transmute me.”
Posted by Molly Daniels at 4:47 AM

Thanks for interviewing me, Molly! I'll pop in from time to time today, so if anyone has any questions or comments for me, I'd love to hear them :)

Hi, Karenna and Molly--terrific interview! Really nice to learn more about you and your writing, Karenna! You've been writing for such a long time--I love it! My daughter loves writing, and I'd love to think that someday in the far future she'll still be writing :)

Congrats on Eternal Love--what a great premise for a story!

To lose so much weight is awesome. Good luck with the book.

Thanks for being here Karenna:) And thanks for the wonderful comments everyone!

Thank you to everyone who commented :) Fedora, I'm sure your daughter will keep writing. I have two daughters, and they both love to write as well.

Sylvie and Loretta, thanks :) I've kept most of that weight off for over five years now, so I'm pretty proud of myself.

Molly, I really appreciate the opportunity :)