Saturday's Stupid Saying and a Photo I Never Thought I'd Ever See Taken! 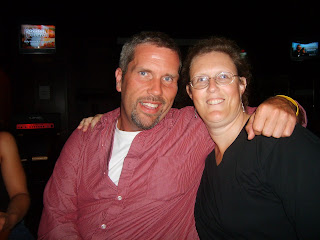 Here is my old neighbor, the 'dumb jock' who moved two doors down from us when he and I were in the 3rd grade. He made fun of me because I couldn't shoot a basketball (at least not while he was watching...our basketball goal had fallen down and I had discovered reading and badmitton by then, lol!) and I used to wonder OUT LOUD in jr high why ANYONE would want to 'go' with him! Of course, girls used to pester me for his phone number, or try to get me to give him theirs, but I refused. Yes, it made me an outcast, but I didn't care. I thought I had 'his kind' pegged, and vowed to never even be FRIENDS with any 'egotistical jocks'.

Fast-forward to high school. I had switched schools, in order to be in the 'better' marching band, and started making friends. One boy in particular seemed to keep popping up whereever I went, and after a period of teasing, we grudgingly admitted we liked each other's sense of humor.

Basketball season began. I'm sitting in the bleachers, not really paying attention to the JV team (they sucked, ha ha!) and talking to another friend. All of a sudden, I hear 'Cross in for Jeff'. I looked up and there is my male friend, dressed in the JV b-ball uniform, heading onto the court.

My friend was looking at the program.

'Give me that,' I demanded, and took it away from her. I flipped through the pages and found the picture of the JV team. 'Oh my GOD! He's on the BASKETBALL TEAM!' I gave the program back and held my head in my hands.

'Who, B? Yeah, he played basketball all through junior high. Didn't you know?'

Monday morning, I went up to B. 'You never told me you played basketball!'

'I thought you knew!'

I walked away, shaking my head. It took him three days of persistance to finally pry the story out of me. But since he'd walked me to my locker and placed his arm around me in the hallway the day after I'd broken up with my boyfriend (in front of the jerk!), it was now all over school that he and I were now dating. We never did fully convince people of our 'friends only' status.

Fast-forward to last weekend: K not only hugged me when he saw me (we hadn't seen each other since 1995), but when I left the reunion on Saturday, he kissed me on the cheek.

I guess time and maturity heals just about everything:)

Have a good Labor Day weekend! K's team did manage to get a touchdown last night! Score was 41-7. Ah well...the season is still young...
Posted by Molly Daniels at 6:01 AM

Amazing how time changes you perspective, isn't it?

Tell K to hang in there. Did he play yet? Maybe they should let him.

Glad you two are friends now.

The season's still young as you said. They'll do better.

Have a great Labor Day!