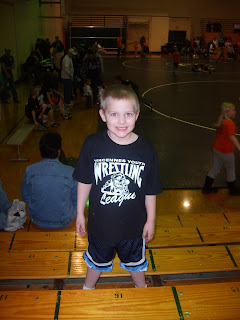 W's first wrestling match was last night. Imagine sixty boys, ages 5-11 after being cooped up at home due to cold temps and snow days. Yes, they were hyped up and ready to burn off some energy! 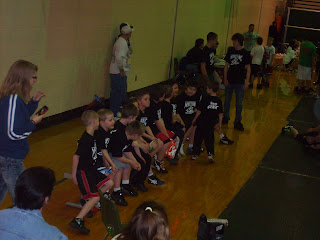 What this picture doesn't show is my little guy jumping off the bench onto the mat. Or other kids jumping up and down, anxiously waiting for their turn to square off against their opponent. 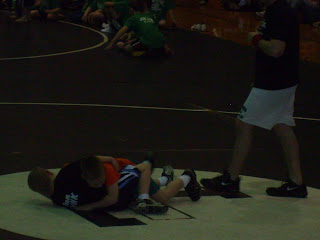 I've seen W wrestle in practice only twice, so I knew he really didn't know what he was doing. But I was thrilled his match wasn't over with one take down:) Here he is, right before the kid in orange got both of his shoulders pinned to the mat.

And afterwards, he informed both the SU and his older brother, 'That was fun! I can't wait to do that again! Next time, I'm gonna get grab him around the waist and jump on top of him."

He wrestles again tonight. And my camera batteries are charged and ready:)

Talked to my mom last night: They went out to dinner wearing only light sweaters, it was so warm in Vancouver! She's bought T-shirts and stuffed Olympic items for the kids, and is currently looking for sweatshirts and the red mittens. K asked if she could get Shaun White's autograph and maybe a gold medal!

I think my nephew will be making one for him, ha ha!
Posted by Molly Daniels at 9:11 AM

All right, W! As for mom, my sis and I know more than a little about wrestling. R has been wrestling here in Lville since December. Sunday mornings are hell since then! LOL But it is great seeing all the kids working so hard...But when the little little ones get so upset over losing, it's really really really hard to watch!