More Pics and a WTF Moment... 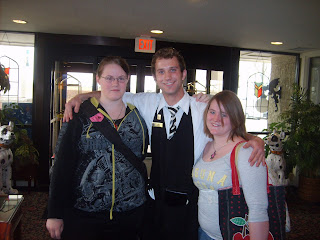 Here is my daughter S and her friend A with Jake, our 'favorite' waiter at the hotel restaurant. He fixed us hot chocolate in the mornings with plenty of whipped cream and swirls of chocolate and caramel:)

The girls were initially embarrassed when I asked them to pose with him, but after this picture was taken, A said, "God he's sooooo cute!" 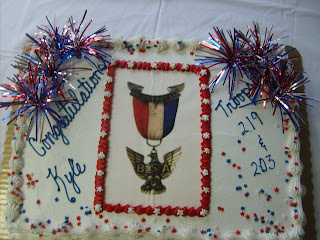 K's cake...I didn't care if it was going to upset his current scoutmaster; I wanted BOTH troop numbers honored! K was already upset he had to change his shoulder patches to reflect the new council and troop numbers. He earned most of his badges in #219, anyway, and gave him the solid foundation, and the motivation, for his chosen academic program. 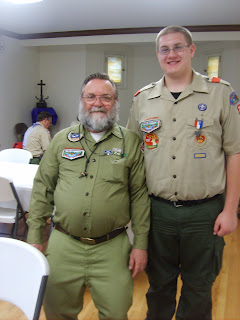 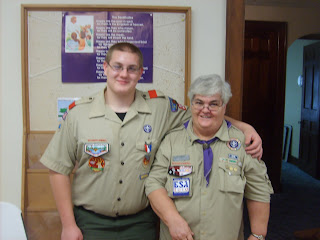 The other Eagle Scouts in the troop have been her grandsons, and they've all given her the 'Mentor' pins. I hope there are no hard feeling because K chose to honor someone else.

WTF? DID YOU SEE THIS??
There's a push to 'retire' Ronald McDonald.

Huh? Last time I checked, young children weren't allowed to drive themselves to the fast-food restaurant. And if parents are soooooo weak they cave to their child's 'demands', then blame the parents, not the franchise. And I don't know about you, but I don't know of any housing development which has a McD's in its midst; most are several blocks away. My child is not allowed to walk that far unless he's with an adult or a teenager.

Thankfully, McD's isn't giving in to this bullsh*t. We've already lost Lucky, Cuckoo, Tony (although I think he's still in the commercials???), and the Fruit Loop bird. You can still see Snap, Crackle, and Pop in the Rice Krispy Treat commercials. Must we lose all our beloved cereal icons, just because parents have forgotten it's OKAY to say 'NO' to their kids?

Insane.
Posted by Molly Daniels at 6:34 AM

Thank you! I was thinking the exact same thing about Ronald when I heard that line it on the news last night. People are just getting way to touché about things these days, if you ask me.

That's the problem, most parents these days don't know how to say NO. They want to be friends with their children instead of parents.