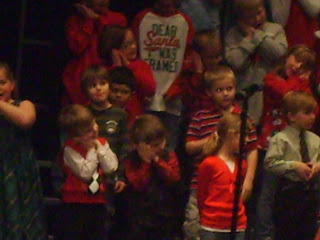 W, in the red and blue striped shirt, singing "Must Be Santa" 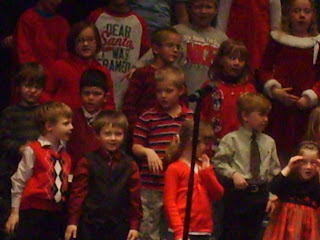 I accidentally uploaded this one; he looks as if he's unsure of the hand gestures or the words:) 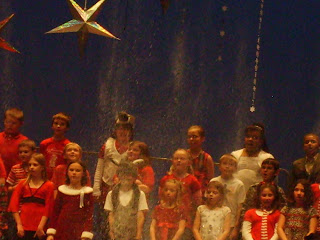 The kindergardeners sat down and the third graders took over. Soon a gentle 'snowfall' joined the singers. 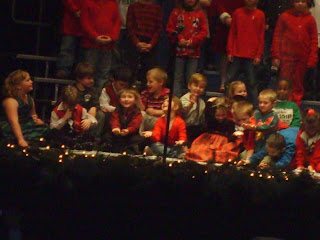 W and his classmates were enthralled by the 'snow'...see the smiles? But at the other end of the stage... 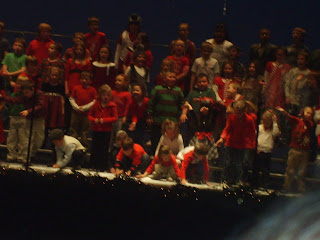 A 'snowball' fight was in progress! They tossed it up; they threw it at each other. At center stage, a 'snowman' was trying to be built. The poor singers were drowned out by the giggles of their younger schoolmates, who obviously weren't expecting the 'snow'!

Teachers were eventually seen onstage, fingers to lips as they tried to restore some semblance of order to the show. But it was nearly too late. We in the audience were laughing, and cameras were flashing, all capturing the comedy of teachers watching their Christmas progam erupt in hilarity!

We Now Return to Our Rehearsed Program... 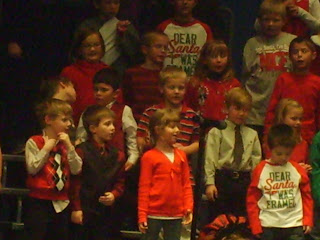 Things did eventually settle down, and the singing was very well presented. There were a few overly-enthusiastic antics; one little girl was thrilled her dress flared when she spun around, and nearly fell over a few times. Another little girl in center stage lifted her dress to scratch her backside:) And a third little girl, when bells were handed out, jumped up and down as she shook hers! And yes, a few of the boys shouted their lines, and was the instigators of the 'snowball' fight!


And we were informed later the entire performance will be available on DVD for $5. I can't wait to show it to Grandma and Grandpa, who were unable to make it down, but wanted to come!

Precious memories. Isn't that what School Christmas Programs are all about? I still remember K being 'Santa' in his 3rd grade performance, and seeing him laying on the bleachers, his coat unfastened, due to being hot before his class took the stage. And S, wearing her blue dress and waving to us from the bleachers. And my sister, who lifted up her dress for her entire preschool performance, as she put the hem in her mouth!

Any funny moments from past programs that YOU remember?

How adorable. I feel like it's been so long since I had a little one around.

I LOVE IT! No one puts on a more entertaining show than a group of Kindergardeners. Thank you so much for sharing. I laughed just reading about it.

No funny moments that I remember, but many precious memories...