Currently Reading: I'm nearly finished with Amber's Buckskins and Brocade. This one is definitely a Recommended Read! I'm loving it! At the Mockingbird Book Emporium, someone donated a Phillip Gulley book, Life Goes On. I think I'm up to Chapter 4.


The lovely Brynn Paulin joined us last night on Anny's chat, and since she's been absent from Blogger, I thought I'd show y'all her new release. I'm still catching up on her books, but this one is going on my list ASAP!

Enjoy:) It's another scorching hot day today, and the pool is closed. Of course, school starts tomorrow, so we must all be too busy buying school supplies to waste time cooling off in the pool, right? SNORT! 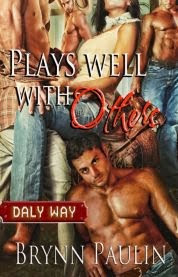 Paisley Szuzman came to the Laurel Ridge Ranch in Daly, Wyoming to interview for
an administrative position, but she's shocked, and secretly aroused, to find
that the job might entail more than she envisioned. Anyone filling this spot
must meet the criteria of plays well with others, and the "others" are the men
on the ranch— four hunky cowboys who are pure, rugged temptation. Bohemian to
the core, Paisley takes the challenge and finds more in store for her than she
ever imagined.

Paisley Szuzman glanced at the tall, rugged man before her and blinked into his
piercing blue gaze. Toward the end of her interview, which she personally felt
as if she'd bombed, he'd come around the desk and leaned against it. One long,
muscular leg crossed the other, and as he studied her, his arms crossed as well.

Ace Graham was about as enticing as a man could get, but he also owned the
Laurel Ridge Ranch. He'd be her boss if she were hired to oversee his books and
such. But as of about two minutes into the meeting, she'd decided she probably
didn't have a prayer. In an office, she was great and came with glowing
recommendations. As someone who knew jack about ranching… Meh…

She shook herself. "I think I should be honest and tell you up front… Well, I'm
sure you've figured it out. I don't know much about, um, ranching. I mean, I've
always lived in the city. I looked to see if there was a Ranching for Dummies or
something, not that I thought it would make me into a rancher or anything." She
laughed uncomfortably.
"Anyway, there's no such thing."

"You don't say," he said, and she suspected he was biting back a grin.
That did it. He probably thought she was a vapid, vagabond twit rather than a
competent office assistant. She was sorta a vagabond but not vapid by any
measure. Generally, she excelled at whatever she did. In fact, she'd often been
accused of being a workaholic which was one of the reasons she thought a job
here in Wyoming might be the ticket for her. She was looking for a slower,
small-town way of life and a job that wouldn't keep her behind a desk until late
at night. She wanted to see sunsets and breathe fresh, unpolluted air.

"Well, city girl," he said. "Why don't we show you some of the place, and I'll
introduce you to my partner, Brant Cauldwell."

"Sounds good to me."

She stood and smoothed her skirt. The pencil cut of it along with her heels
probably wasn't the best idea for tromping through a barn, but she didn't
particularly want to tell him she could easily change clothes. Her entire life
was packed in her small, yellow Volkswagen parked out front. Besides battling
her rampant workaholic tendencies, she'd left my last job to move west to care
for her grandmother who, it turned out, was absolutely fine once she'd had a
medication change. Gram was great, and Paisley was at loose ends with a trunk
full of her only possessions.

"So you don't know anything about ranches. Have you ever ridden a horse?" His
denim-clad legs unfolded as he rose. He was so tall her head came to the middle
of his chest where his light blue work shirt stretched over his wide pecs. His
dark hair brushed his collar, and she had to fight back the desire to reach out
and see if it was as soft as it appeared.

"No. The closest I've come to a farm animal is an Old McDonald Golden Book."

"So…why is it you wanted a job on a ranch?" he asked with some confusion.

"I wanted a life outside the city and I can do the job. The office part. I'm
good at it. Really good. And I'm a fast learner. It's one of my best skills—that
and getting along with people."

His blue eyes assessed her, and she wondered what he was thinking with the
intense gaze. He gave a slight smile.

"So you play well with others?" he said, skirting her and reaching for his
Stetson.

"I guess that's one way to put it, though usually I'm not much for playing."

"That'll need to change if you stick around here. We work hard, real hard, but
we play hard, too. And with it bein' fall, the days are getting a little
shorter." The rhythmic clunk of boots stopped as he turned to look at her. "That
means more play time pretty soon, but not yet."

"Okay." She didn't know what else to say. She didn't get what he was saying, but
she knew work didn't stop when the snow flew. Cows didn't just hibernate for the
winter.

They headed through the outer office then into the massive living room of the
main ranch house. It had to be large, she supposed. He'd mentioned that the
sprawling home had six bedrooms so the person hired for admin would use one of
them and have the run of the house. Any place with a half dozen bedrooms had to
have adequate living space for the occupants. Of course, there was plenty of
space outside. The ranch encompassed 28,000 acres.

"How many cows do you have?" she asked as they entered the front hall.

"At the moment, we have twelve hundred head."

"That's how we count them anyway. I'd have to look in the books for the exact
number because most of the adult bulls count as one and a half animals and the
mothers and their calves count as one."

Then they were outside and Paisley took a deep breath. The scent of pine and
sage and tall, fresh grass hung heavy on the air. Horses were penned nearby and
with that came a slight odor of dung, but it wasn't enough to disturb her
enjoyment of the crisp late-September day, with its hushed breezes and clear
blue skies.

"Do you have boots?" Ace asked.

"You'll have to get some then." He looked down at her nearly four-inch black
pumps—her Christian Louboutin power shoes from New York. "Those pretty little
things just won't do, city girl."

Without waiting, he headed across the space that separated the barn from the
house. She hurried after, doing her best to stay forward on her soles and keep
her shoes from sinking into the dirt. All without twisting an ankle and breaking
her neck. Boots. Check! She'd get some ASAP. Even is she didn't get this job,
she'd need them if she stayed in this area.

"Brant," Ace called as his long, mouthwatering legs took him into the barn. She
heard a muffled oof, just as she entered, then her eyes adjusted to the change
in light and went wide at the sight before her. A man… She swallowed. A
dark-haired man as tall and as wide as Ace had him pinned to the wall, his hand
fisted in Ace's shirt as he kissed him. Hard.

She blinked. Staring. Then trying not to stare. Then looking back again because,
sweet heaven, they were a beautiful sight together.

"Brant," Ace growled when his lips were free but still against the other man's.
"We're not alone."

"It's not them," Ace interrupted.

The new man glanced over his shoulder. "Oh. Hey, miss. Sorry, I, uh…" His hand
went up to scratch the back of his neck just above the collar. He left the
sentence at that, apparently uncomfortable with his display in front of someone
new.

"Brant," he said as his big hand enclosed hers.

Not a good time for the pool to be closed. Try to stay cool.

And thank you for the link to Mockingbird. I love that beautiful storefront.

Thanks for having me here today Molly!!!!

Thanks Amber and Linda. I'm really excited about this release. Cowboys. Yummmm!

Isn't that beautiful? The inside is light and airy:) Check out the facebook page...it's on my FB page.