"Merry Christmas; You're Now An Adult!"

Christmas 1989
I now had my own apartment, and was engaged to the person I now refer to as The Idiot. On Christmas morning, he came over and we opened the gifts we'd bought each other, and then I accompanied him to his parents' home. Afterwards, we drove to my parents' house, where a pile of presents were waiting. These included:
-My first vacuum cleaner
-Clothes
-My first crock pot
-Brand new kitchen utensils
-Other kitchen gadgets
-A humorous guide to planning a wedding
-And of course, various books and cassette tapes.

The engagement only lasted two more months; he was verbally abusive, and finally after one fight, I took off my ring and threw it at him. He tried to give it back six months later, but I refused. 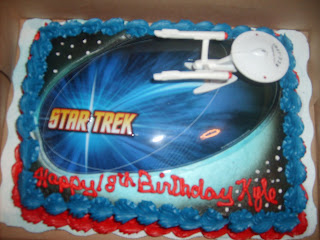 K's birthday cake from a week ago. W took control of the USS Enterprise and 'flew' it all around the house. 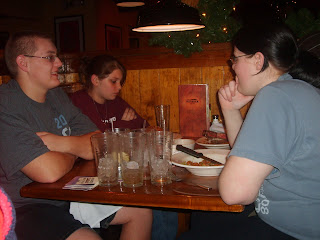 Taken Sunday, at Outback Steakhouse. K and his girlfriend; S and friend M (S moved, blocking M as soon as I took this. There's a better picture farther down.) 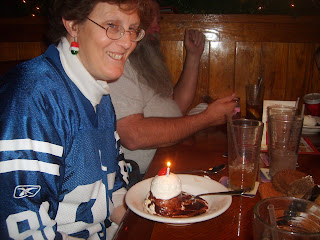 Me and my birthday sundae. K and I both received these; as soon as I blew out the candle, I swapped desserts with my mom, who'd ordered the cheesecake with chocolate sauce:) 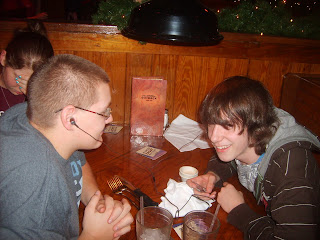 And finally, K and M, sharing the ear buds to M's iPod! A very good meal spent with good friends and family!

Wow...I just happened to be taking a look back at past blog posts, and I discovered the books I'm reading now have actually been on the schedule to be bought since MAY! This has been a rough book-buying year. Hopefully things will be better in 2010??
Posted by Molly Daniels at 5:18 AM

Sounds like everyone had a great time. That cake is cool.