Flashback Friday: Protective Dog and A Phrase I HATE!

Where did  last week go?  I totally missed TBT and Friday....

July 1995:
My sweet baby girl turned one year old:)  We went to my inlaws for the weekend, sort of a 'do-over' of what had been planned the year before, ha ha!  We ended up  taking Hercules, the dog we were watching for the weekend.

We arrived at the farm and Herc, a white American Eskimo, jumped out of the car and right into a pile of muck.  He enjoyed running around with  the other dogs, with the exception of Old Bo, one of the many hounds.

Old Bo decided it was his duty to protect the youngest member of the family, who was not yet walking, as she made her way up and down the walkway from porch to driveway.  Every time he thought she was a little too close to the gravel drive, he'd haul himself to his feet and lay down in front of her, so she'd have to turn around and go back. Then, satisfied she was safe, he'd return to his spot by the steps, so she wouldn't try to climb up:)

Later that day, S took her first steps at Grandma's, and even gave her father a mini-heart attack! She'd crawled up on the porch railing and after going nose-to-nose with Daddy, she sat down and watched him.  Suddenly, she threw open her arms and bailed off, ala 'Catch me, Dad!' Fortunately, he did catch her, and I was ready with the camera.  The look on his face is priceless!

She'd  also developed a cheesy grin for the camera, and enjoyed her birthday cake and ice cream.

Next Month:  Fun at the new downtown mall

July 2005:
We celebrated S's 10th birthday with a few of her friends and going to see the fireworks in town.  A and J's mom moved to a new house in Terre Haute, and began selling Pre-Paid Law, earning a $1000 bonus in her first three weeks.  She tried to get me to do it, saying, 'This will give you something to do during the day...', which pissed me off.  Didn't I already have enough?

My duties during the day included:
-taking care of a 16-m/o
-writing
-keeping up with the housework
-managing the household while the spouse worked 15+ hours a day.

What the hell did she think I DID all day?  It certainly was NOT watching TV all day long!

Next Month:  Back to school with an 8th and 4th grader:)

**********
Present Day:
My sister and her family are visiting from Whitehorse, Yukon Territory, Canada, so the youngling and I will be spending the weekend with them.  We plan to go to Chicago to the Science and Industry Museum on Sunday, then dinner at Giorgino's Pizza.

Went to my last karaoke night at Old Towne, since the DJ  I've gotten to know was let go in a  rather shitty manner.  The place was dead last night, and was not that impressed with the new KJ, but still had a good time. Sang the following songs:

I'd Do Anything For Love  Not bad; at least this one included the girl's part, even though  I'd written it down!
2 Black Cadillacs  Better:)
I Remember You  Nailed it!
I'd Lie For You And That's The Truth  KJ downloaded it, but no words appeared onscreen.  Good thing I know some of the words!  Enjoyed singing it.
I Will Be  Nailed it:)
Broken  I was heading out when KJ began singing it.  I volunteered to be his 'Amy', and we did well:)

Have a safe and happy weekend!
Posted by Molly Daniels at 7:19 AM 2 comments:

July, 1985:
Since my uncle had married the previous year, and I had not met my new cousins, a family vacation was planned.  We traveled to Gatlinburg, TN and spent an enjoyable week with my grandparents, aunt and (favorite) uncle, plus Aunt Gerry's kids, Harold and Kelly.  Our hotel was right across the street from an arcade/bumper car place, and Harold and I soon bonded over the game Punch Out, plus rode the bumper cars.  We also toured the city and played Hillbilly Golf; got our pictures taken in old-fashioned costumes (my sis and I were saloon girls, ha ha!); visited the Ripley's Believe It Or Not museum; went in a Haunted House; took the tram to the top of a mountain; and had a great time on the Alpine Slide, though I was somewhat responsible for my sister's accident.

In my defense, even though we decided to race each other 'full throttle, no brakes', you had to brake SOMEWHAT on the curves!  But W took me at my word....and about halfway down, her empty sled shot past mine, then my relatives were running UP her side.  When I finished, I discovered her sled had flipped on one of the first three turns, and she was suffering road rash, as well as severe scratches on her legs.  All four of us were scolded and told 'no more racing' down the mountain.

We also toured a foam house, 'Xanadu, House of the Future', and watched the 4th of July parade and fireworks from my aunt and uncle's balcony.  One day, we went to Silver Dollar City, which became Dollywood a year or two later.

We noticed Grandpa moving slower, but simply attributed it to his advanced age.  Two weeks later, after calling Grandma to wish her happy birthday and being picked up from watching the movie St. Elmo's Fire, the phone rang.  Grandma had returned home from her evening out with friends, kissed Grandpa goodnight, and watched him go upstairs.  Two hours later, she went up to find him sprawled across the bed, and gone.

Dad had taken off for Colorado, and since we didn't know his exact route, Mom called the state police to track him down.  We joked Dad was wanted in five states, ha ha!  Grandma and my other Florida relatives flew up, and Grandma laughed when she told us the news:  "Grandpa used to say, 'in order to get to Heaven, you have to change planes in Atlanta'....well, Grandpa had to change planes in Atlanta!"

For the second time that month, we spent time with relatives, then Mom, my sister, and I returned to Florida with Grandma, to help her go through everything.  To make matters worse, the townhouse had just been painted, so everything was boxed up and shoved into closets.

Wendy and I were able to take a bus trip to EPCOT and spent an enjoyable day riding the attractions.  We brought back a small Figment figurine, as well as an EPCOT tape.  Mom and Dad had bought a new station wagon, which included a tape deck, and on the way home, we'd always start off with singing along to that tape.

Grandma had let her driver's license lapse, due to Grandpa driving her everywhere, so we took her to get it renewed.  I also got my permit:)

Next Month:  Returning To College

***********
Present Day:
Due to the rain, our exterminator appointment has been postponed until Monday.  I'm still trying to get as much as I can boxed, bagged, and sent to the storage unit.

Have a great weekend!
Posted by Molly Daniels at 11:20 AM No comments: 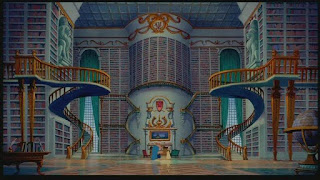 You've seen the Beast's library, right?  I'd love to set up my desk, computer,printer, etc, in the center of this space, and have all my books displayed, including space for all future books.

If that's a little too grand, then go back to last week's post  and check out the first picture.  I'd also love to have a door where I can post a sign, 'Do Not Disturb Unless Fire, Broken Bones, or Life Threatening Issue.'

Yes, I dearly miss the days when I'd send the kids off to school, pour myself a cup of coffee, then disappear into my office until lunch time.

Unlike other moms, I look forward to the empty nest.  I guess I'm truly a loner at heart, though I do enjoy getting together with friends and sharing a meal, watching a movie, or singing karaoke!
Posted by Molly Daniels at 3:30 AM No comments:

Songs Added To Karaoke List:  2
My Thursday night KJ had Telephone Man by Meri Wilson, plus I sang Stop Draggin' My Heart Around.

Health:
If the fluid in my ears hasn't dried up by August, I get another tube inserted.  Fun, fun.

Saturday Night:
I Will Remember You-Sarah McLachlan  Bleh, though some said it was okay...
I Will Survive-Gloria Gaynor  Nailed it:)
I'd Do Anything For Love-Meatloaf  Okay; I need to write  down the girl's part and sing it during the instrumental part....might redo this at Old Towne.
If Anyone Falls-Stevie Nicks  Bleh.
If I Only Wanted To-Melissa Etheridge

I'll update this more, when I have more time.
Posted by Molly Daniels at 10:41 AM No comments:

July 1975:
We spent the 4th up at Lake Schaffer with Mom's BFF, Kathy Tandy Groustra and her family.  Peter, Tim, Vicki, Wendy, and I began an all day Cops-n-Robbers game, which was part hide-n-seek, part C-n-R, since Peter and I were the robbers, and had to hide from the others.  I remember hiding out in the shed and holding my breath when Tim opened the door and looked around, but didn't see me on the tool bench,

We also took a speedboat ride up and down the lake, then passed Indiana Beach.  I pouted; I wanted to stay the night and go to IB the next day, but Mom said no.

After dinner, we sat on the dock while Peter's dad set off firecrackers.  I can still picture the Roman Candles going off over the water:)  (This is where I got the idea for the opening scene for Caty and Bryan's story, lol!)

***************
Present Day:
Today is my daughter's 21st birthday!  We're starting off with a family dinner at the restaurant of her choice (Applebee's), then I'll be the designated driver for a night on the town.  I'm hoping to take her to at least two karaoke bars, so I can sing some more!
Posted by Molly Daniels at 8:15 AM No comments:

I'd love to tell you my office looks like this: 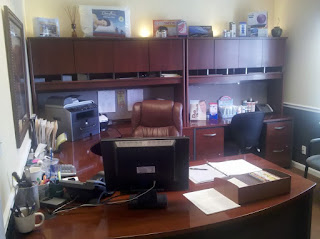 You may even imagine my office looks like this: 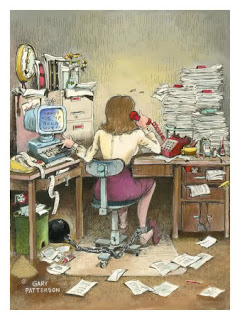 I wrote most of my work on this one. 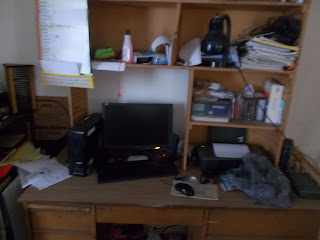 But since receiving my laptop Feb 2011, THIS is my current office space, where I wrote Kenzie's Sci-Fi series, and did all the edits from July 2011-present:) 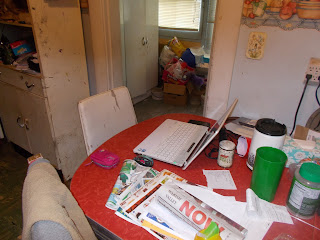 Notice the room at the back?  That's our utility room, where cookies, popcorn, and the microwave are housed.  The past month, it's pretty common to hear the words, "Can you move..." just when I've settled down to write!  Why not move?  If I sit to the right, I run the risk of kids looking over my shoulder.  If I sit at the other end of the table, I'd be blocking the back door.  Yes, my kitchen is that small.

Table is pushed against the wall, so when dinner is ready, we pull it out and people have to walk through the hallway in order to get around to this space.

July reading schedule will be posted either this weekend or Monday:)
Posted by Molly Daniels at 8:22 AM 1 comment: