Flashback Friday: Back To School:)

Aug 2005:
We began the month with MDQ and ME's 4th and 3rd birthday party at J's new house in TH. She would be bringing them to my house every day while she worked her new job.  That was the original plan.

K and S began 8th and 5th grade, and all seemed to be well.  S liked her new teacher, and junior high seemed to be agreeing with K.

We settled into a comfortable routine; K and S knew that if I didn't show up at school in the afternoon, it was because all three little ones were napping.

I was now back on the 'write-when-the-little-ones-nap' routine, and trying to finish book #6 of Arbor U.

Next Month:  Upset In Routine

**********
Present Day:
I forgot to post this yesterday!!!
We're in week #2 of K12, and Youngling is doing well:)  I discovered I wasn't teaching him spelling properly, so yesterday we made up notecards and he spelled all but 4 correctly!  Today we're doing yesterday's lessons, since we were gone most of the  day on Wednesday, so the lessons were adjusted.

Was frisky at Brower's Karaoke on Wednesday, singing the following songs:
Out Here On My Own
If I Only Wanted To
Do You Want To Touch Me
I Hate Myself For Loving You (by request)

Tonight's songs:
I'll Be There (Mariah Carey)
City of New Orleans (Arlo Guthrie)
I'll Be Your Shelter (Taylor Dane)
I'll Never Get Over You (Expose)
I'll Stand By You (Pretenders, back up song)

Have a great weekend!
Posted by Molly Daniels at 7:59 AM No comments:

Aug 1995:
With my baby girl now mobile, life was more busy, keeping her safe from knocking things over, and keeping her from exploring her climbing skills on my desk.  She was determined to keep up with her brother, and followed him everywhere.

The downtown Circle Center Mall opened, so we naturally went to see it.  We soon learned to love the circular glass elevator which took us to the food court and upstairs to the arcade, and both kids (okay, ALL of us, ha ha!) fell in love with F.A.O. Schwartz.  I think S wanted to take home the entire stuffed animal collection!

We ate pizza and gyros in the food court, enjoyed the 50's music spilling out from Johnny Rockets, then hooked S on her 'leash' and walked her around, chewing on her pizza crust.  I soon learned to enjoy the Warner Bros store, as well as Disney, and Sam Goodey Records.  Bodyworks, Victoria's Secret....Eddy Bauer....Nordstrom...Parisian....I was in love.  I think we even bought S some socks at Parisian!  D soon turned me onto Irish Cream lattes at the Nordstrom coffee bar, and we took home some specialty chocolates.

My favorite memory, however, is watching S, happily munching on her pizza crust, then her temper tantrum after dropping it and having Daddy throw it away!  I don't remember if we had to stop at the Cookie Factory to distract her, but she was NOT happy!

*****************
Present Day:
School began this week for my 5th grader, and this year, 90% is done offline.  It's put a hurt on my writing, since we have to do so much work with me supervising him.  He fought me on spelling; literature; and even Math yesterday.  I'm hoping our new Plan works this coming week!

Karaoke Songs:
If You Love Me-ONJ
Don't Forget Me When I'm Gone-Glass Tiger
If You Could Only See-Tonic
I'll Be-Edwin McCain
Posted by Molly Daniels at 1:52 PM No comments:

Flashback Friday: Back To College!

August 1985:
I forgot to mention: In the chaos following Grandpa's death, my roommate assignment arrived, and I was dismayed to note K and I would be in the room next door to where EY was, with three others.  Repeated attempts between the three of us to get back in our desired room were met with frustration.  We were told we could swap after school began. Defeated, I called the other two girls and introduced myself.

When we returned from Florida, another letter from school had arrived, moving me, K, EY, and one of the girls I'd called, to our room:)  We thanked God for His intervention, and I happily packed my things again.

EY and I arrived on Saturday, and discovered that while though only two of the four beds were bunked, we moved K's bed to our side, in hopes that soon another set of bunk beds would be traded for the two singles.  The plan was to put all the beds on one side, then turn the other into our 'living room'.

K arrived and approved the plans.  I worried about alienating J, our new roomie, but kept silent. We went out to dinner and when we returned, we found a stunned J unpacking and wondering why she was alone on that side.  After explaining the plan to her, she relaxed, and E and I were happy when she and K hit things off.

A family friend was also attending the same college, so when he arrived, E and I went to help him move in.

After registration, and buying our books, E was contacted by L,a guy she'd known the previous year.  We went to his apartment and I promptly forgot about not mixing alcohol and painkillers, and was soon sleepy after drinking half a bottle of wine.  L kept saying there was someone who wanted to meet me, but N arrived as I was being taken back to the dorm, and said he'd catch up with me later.

Three days later, N caught up with me and asked if I was going to the dance that evening, then agreed to meet up later.  During the dance, N asked me to go to a party with him.  I said I'd give him an answer soon, then E approached and said L wanted her to go to a party! We agreed, 'Just this once!'and went our separate ways.

"Want To See Where I Live?"
N and I went over to a place on 6th street (incidentally, the same place E was) and started playing Quarters.  N asked me if I'd like to see where he lived, and I said sure.  Later that evening, he introduced me to one of his roommates, then disappeared to another party next door.  Confused, I followed him, and he expressed surprise I still wanted to be with him. He took me back to his house, gave me the grand tour, then pulled back the curtains on a private room downstairs.

*needle scratch*  Uh-oh....I realized I'd mistaken his euphemism, taking it at face value!  When I told him I'd not been with anyone since May, he agreed to take things slow.

The next morning, I woke up in an awkward position.  N was still asleep, and I didn't know what to do.  Get up and leave?  Wake him up?  I'd already missed my 8 am Geography class....oops, 3 vows busted.  I decided to wait him out.

After getting back to my room, I hopped in the shower, since my next class wasn't until 11.  Suddenly the door to the bathroom flew open.

"Where the HELL have you been?"

I poked my head out of the shower.  "I, uh, spent the night with N.  Details later; I've got a class in thirty minutes."

E laughed.  "I spent the night with L, but got in around seven.  Confession session after lunch?"

E had also hit it off with my friend, and I rather liked D's roommate!  But after being with N, I thought I'd found a new boyfriend.

Boy was I ever wrong!

Went to karaoke last night, but only sang one song, Just Breathe by Anna Nalick. I realized earlier in the day I know the DJ's wife; she used to be one of my 'personal assistants' at Office Max:)  Brower said she remembered me too, and was surprised I'd not mentioned my author status to him.  I told him it wasn't something I brought up unless asked, and since I'd only known him for a month, I hadn't felt the need to volunteer that information!

Tomorrow's Songs:
If I Can't Have You-Yvonne Elliman
Behind These Hazel Eyes-Kelly Clarkson
If You Love Me-Olivia Newton-John
If You See Him-Reba/Brooks and Dunn
Posted by Molly Daniels at 6:31 PM No comments:

July's Goals...Did I meet any of them?
-Get house fumigated Check:)
-Write Heart Song, or at least get close to finishing it! Not even close...still on Ch 3
-Buy promo for Watermelon Fest No.
-Finish paying for Christmas Gift and Hobby Show No
-Keep sane Jury's still out on this one, ha ha!
-Drop another 5-10 pounds Managed to drop 2, so hey....progress!

Karaoke Songs:
Wednesday:
Breathe-Breaking Benjamin B didn't have this, which is okay; I sung this back in 2011, when Cheryl was KJ-ing, and it's too low for me.  Was just hoping to get it on video.
Broken-Lifehouse
Don't You Wanna Stay-Kelly Clarkson/Jason Aldean
The Climb-Miley Cyrus
Consider Me Gone-Reba
Do You Wanna Touch Me-Joan Jett  LOL....nailed it!Everlasting Love-Rex Smith/Rachel Sweet
Foolin' Yourself-Styx  Nailed it:)
Heaven is a Four-Letter Word-Bad English
I Wanna Dance With Somebody-Whitney Houston  Little shaky, but not bad.
If I Only Wanted To-Melissa Etheridge Okay....

Saturday:
If I Can't Have You-Yvonne Elliman Okay; others liked it!
If You Love Me-Olivia Newton-John Nailed it!
I'll Be-Edwin McCain Okay....
If You See Him-Reba/Brooks and Dunn I nailed MY part; the rest was a comedy routine!  But then again, given who I chose to partner with me....I kinda expected it!
I'll Be Your Shelter-Taylor Dane
I'll Never Get Over You-Expose Nailed it:)
I'll Stand By You-Pretenders
If You Could Only See-Tonic

Aug. 1975
Mom took my sister and I to be registered, W for afternoon kindergarten, me for 4th grade.  While I was thrilled to finally be allowed to check out books from the 'big kid' library again, I was less than thrilled with my teacher assignment.  But I resolved to be good, do well, and best of all, I was awarded the responsibility of caring for my younger sister for two hours after school.

The first day of school, I received a surprise.  We would be changing classes every so often, and were given green 'washtubs' to hold our book and papers as we switched.  The big surprise came when I realized I'd be spending most of my time in Mrs. R's room!  Maybe this would be an okay year, after all?

Next Month:  Sinking To The Bottom of the Pecking Order

************
Present Day:
I've dealt with severe computer issues this week, after an AWESOME time at the Watermelon Festival, selling five books, which means I broke even for once:) 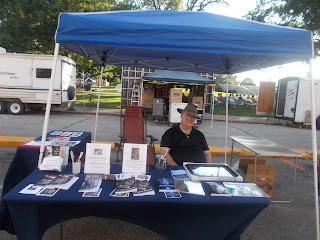 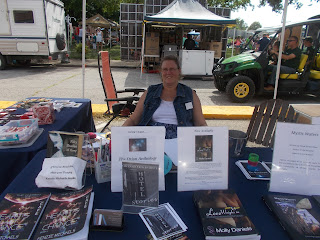 I completely sold out of Hotel Stories, and someone even bought one copy of Heart's Last Chance:) 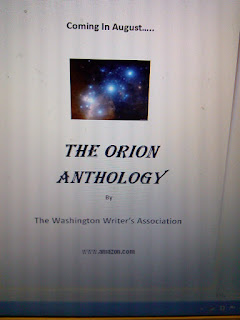 In other news, we're headed up to Indy tomorrow for MDQ and ME's birthdays.  Hard to believe they're 14 and 13!  I should be back in time for karaoke, and plan to sing the following songs:
If I Can't Have You-Yvonne Elliman
Behind These Hazel Eyes-Kelly Clarkson
If You Love Me-Olivia Newton-John
I'll Be-Edwin McCain

Have a great weekend!
Posted by Molly Daniels at 11:25 AM No comments: