Sept. 2009:
We received a phone call.
"Remember telling you about my friend's black Cocker Spaniel, Roxie?  I just discovered they've left her tied up in their back yard and aren't taking very good care of her.  I'm going to go rescue her."

Next Day:
"I managed to get her, but there's a problem.  She's so food aggressive, she's not getting along with my dogs.  Can you take her in?"

We talked it over and agreed to take her on a trial basis.  "As long as she gets along with Lucky (our black Lab).  If not, she'll have to go elsewhere."

My daughter and hubby went to get her, and this is what she looked like. 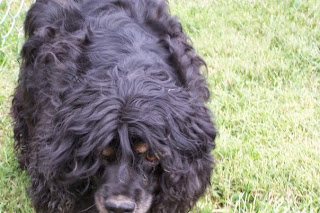 After 3 hours with the clippers, our little wooly lamb turned into a sweet dog!  She quickly made friends with Lucky, who was so good-natured she'd probably get along with anyone, and tolerated the presence of the two caged rats. 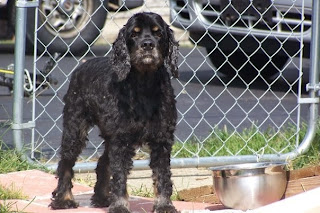 Over the years, she grew less aggressive toward the food bowls, learning there was food all the time and plenty of it, as well as a water bowl which was filled on a regular basis.  A trip to the vet confirmed she was maybe 8 years old, and cateracts were developing.

In 2010, we had to put Lucky down, due to her incontinence.  Six months later, the daughter adopted a two year old 'German-Rott-Bull-Chow' named Cheyenne.  The rats, meanwhile, succumbed to old age.

When the summer of 2012 rolled around, a grandchild joined the family, followed by a Pit Bull the next year.  Roxie was now nearly totally blind, and getting hard of hearing.  She had her little 'nests' around the house, and would lay on anything soft, even a stray sock.  She loved pillows and blankets more, though.

Last year, she gave us a scare.  She managed to get loose from her chain in the back yard and had made her way over to one of the kennels five blocks from us.  How she managed to navigate her way across several busy streets, we'll never know, but she was soon home again.

Being so quiet in the house, she's had the misfortune of being kicked across the bedroom floor in the middle of the night, stepped on when I get out of bed, or even being in the way as she tries to remember where the doors are located.

She scratched so much at our back door, she wore a hole in it.  Last week, when we had a warm spell, apparently someone neglected to close the inside door, and she managed to sneak out through the hole.  The spouse reports closing the inside door around 1am, when the temperature began to drop.  At 9 am, we received a phone call from the animal shelter, asking if we were missing a dog.  A quick survey revealed Chey and Dexter (Pit Bull) were indeed inside, but where was Rox?

We drove over to get her, after convincing them not to microchip her, flea dip her, or anything; we couldn't afford the $45 fee to pick her up.  I was in tears; my baby had been outside in the 55 degree weather, and she didn't do well in cold, having arthritis.  The worker told me she'd been in the outside pen all night, and was shivering, barely able to walk.

We brought her home, confusing her more when she came in through the front door, and it took her several trips around the house before she 'knew' it again. 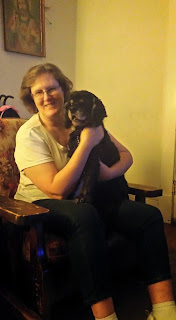 We knew last year she was coming to the end of her life; we often joked she had Doggy Alzheimer's, since she would often go out to do her business, then want out again 5 minutes later.  She's gotten lost in the house and had to be led to the back door or even her water and food bowls.

After getting her rabies shot last year, the vet confirmed she was elderly, and as long as she stayed warm and seemed to be getting around, she was okay.

Recently, we've observed her having mini seizures in her sleep.  She'll twitch, unlike while dreaming.

She's forgotten how many steps it is to the back door and has fallen down the last one.  Conversely, she has to sniff her way to the wall on the way in, and avoid the door at the top of the three steps.

She can't pull her chain free when it gets stuck in a crack, or the edge of the concrete.

She waited too long one day to let us know she needed outside and emptied her bladder in the kitchen (a blessing; thank god it wasn't on the carpet!).

Cheyenne has been caught 'bullying' her; pushing her aside and preventing Roxie from getting a treat, or even blocking her food bowl. 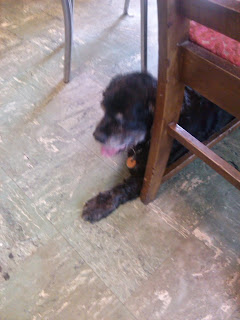 With a heavy heart, I made the call on Monday, and arranged for her final trip to the vet today. I had to do this five years ago with Lucky, and I've done nothing but cry for the past three days.  In fact, I think I've gone through an entire box of Puffs as I try to write this! 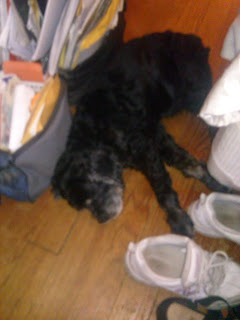 I know this is the best thing for her, and so she doesn't suffer.  I get that.  It's just so hard to let go of a pet who stole my heart five and a half years ago. 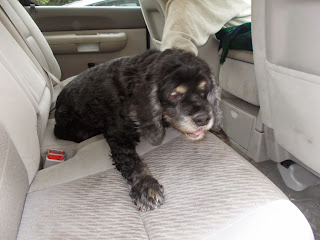 Roxanna Marie, you've been a wonderful companion and I'm happy we probably gave you the best years of your life.  Enjoy hunting rabbits with Lucky, Keisha, and Shadow. 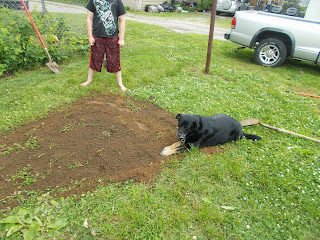 Oh Molly, I can feel your loss. We buried two labs last year. We do love our furry friends a great deal. *hugs*

Molly i'm so sorry ,i know how you feel in 2009 i lost my chow/shepherd ..Samantha Jo..& 4 weeks before Steve died we lost our beagle Scooter(Steve's beagle). Our pets our like having kids but these kids have 4 legs .Sending you prayers & big hugs.I love the tribute to Roxie ,it was beautiful.