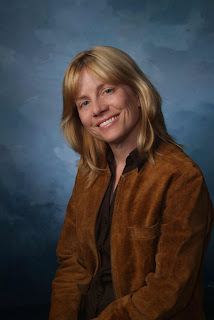 Hi, everyone, I’m Keena Kincaid. I write historical romances with paranormal elements and am beginning to dabble in contemporary tales. My latest release is ENTHRALLED, which is about a knight in love with the most dangerous woman at court—the king’s would-be mistress.

Have you ever had an idea for a story that scared you after you began writing it?

This one, to be honest.

ENTHRALLED is the sequel to TIES THAT BIND. The books share the same characters and external plot.

Midway through writing TIES, I realized that the external conflict—Queen Eleanor of Aquitaine's attempt to murder her husband, Henry II, and rule as regent through her eldest son—was not going to be wrapped up in the book. TIES had two very strong secondary characters that could easily make the leap to star status.

However, William, the would-be hero has a very unheroic secret, two actually. I wasn’t sure I could make him appealing. But I was half in love with William already, so any excuse to write his story was good for me—and I love a challenging hero.

Also, while William and Ami continue the fight against Eleanor's treachery, readers learn what happens with Aedan and Tess as they begin their marriage.

It’s a little difficult to incorporate real events into my 12th century settings, although I have used the occasional situation or overheard dialogue.

I’m a life-long student, studying medieval history for much of that time. I’m also a member of the Medieval Academy of America, which enables me to keep up with recent research. So I tend to write first, and then research to fill in the details as I revise the second draft.

First and foremost, I’d like my readers to get a great read out of my story and maybe even want to know what happens to my characters after the story is over. But if there’s a message, it’s ‘be bold.’ My stories often revolve around free will vs. fate. Does what we were determine what we will become? This plays out in choice and consequences for my characters, but eventually they step out on faith and boldly proclaim their love for another character or his/her intentions. It may not always end happily, but my characters (like me) would rather regret what they did, than what they didn’t do.

I try to plot. So help me, I really do, but regardless of how much advance work I do, the story always takes on a life of its own and veers wildly off my original course. I usually replot at the midway point of the first draft, and then need to do at least two more plotting sessions before the end of the first draft. I write the synopsis from there. The story often takes another turn or two as I work through the second draft, but it’s set and the third time through is generally for tweaking and making sure the scenes hit that “next level.”

I started working on my first book about 15 years ago, finished it, sent it off, got the most polite, encouraging rejection from Harlequin imaginable, and then stopped writing for about five years. I got serious about being published about 10 years ago, and my first book ANAM CARA was published in 2008.

Recognize a polite, encouraging rejection for what it is and keep submitting.

Laptop. Once in a while I use pen and ink, but not very often. My must-haves? Coffee. Music or some sort of background noise. Solitude.

This is always such a tough question. I’ve been a voracious reader since I was four years old, and I have no idea how many books I’ve read or the authors who have somehow influenced my writing. The first romance I think I ever read was The Witch of Blackbird Pond (I know I know, It’s not categorized as a romance) when I was in first grade. The plot and structure of that book has stayed with me and started a lifelong love of smart, brave heroines.

I’ve been told that I write very realistic minstrels. But the truth is I can’t sing a note or play an instrument. I just write down what the voice in my head tells me.

Dressing as a gypsy fortune-teller and going trick-or-treating with my friends when I was in fourth grade. It was the first Halloween that I was allowed to go out with my friends instead of a parent. I felt so grown up.

I don’t like scary movies, so I really don’t have a favorite.

The Wolfman. He lives under a curse but fights to retain his humanity. Neither Dracula nor Frankenstein have that inner conflict.

Keena Kincaid, the author of three historical romance novels with The Wild Rose Press, is blogging to celebrate the release of ENTHRALLED, the third of her Druids of Duncarnoch series. You can find her at http://keenakincaid.com, on Facebook at http://www.facebook.com/pages/Keena-Kincaid/ (fan) or http://www.facebook.com/keena.kincaid (friend), Twitter and her blog, http://typosandall.com 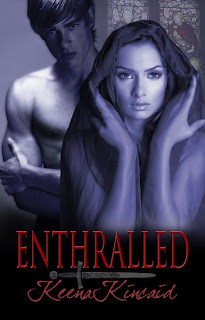 
To claim her, he must abandon home, duty, and honor—or reveal the secret of her Sidhe heritage and risk losing her forever to dark magic…

William of Ravenglas wants only one woman—his foster sister, Ami—but she is promised to another, a fate sealed by his father’s recklessness. Resolved to her forfeiture, he forges a dangerous path to bring stability to the house of Ravenglas, balancing the secret demands of the queen against loyalty to the king.

Ami, true sister to Aedan ap Owen the minstrel, refuses her fate. She wants William. But when his kiss awakens her dormant magic, it triggers cascading events that sweep her into the queen’s fiendish web and threaten William's life.

Now Ami must learn to control her fey powers or watch William die. But with a mystery lover in his past, even if she succeeds will he truly be hers?

She looked up. His eyes were heavy and dark and filled with a need that sent woozy warmth through her. She could see it in his expression, feel it in the way her heart pounded when he looked at her. He wanted her. Flames licked the back of her thighs, the skin behind her ears. She grazed her fingertips across his chest, trying to figure out how she could force a man almost twice her size to kiss her again.

She flattened her hand against his chest until she felt the distant, fast thud of his heart. Maybe this would be easier than it should be. In a swift move, she rose on her toes and brushed her mouth against his. He pushed her back, then grabbed her arms, as if to keep her away.

Something akin to pain blunted his voice, as if the words were forced to cut themselves free of his tongue. His eyes, though, were dark, the pupils so large only a pale ring of blue remained, and his breath came in short, shallow bursts. A brilliant purple rose between them, over them, filling her senses with the heady perfume of thyme blossoms.

His eyes turned the deep hue of bruised violets. His will wavered, then shattered.

She stilled, suddenly terrified of the thrum and churn in her blood. Her body felt insubstantial yet so heavy her knees threatened to buckle. Slowly, as if giving her time to run, he stepped her backward. Her shoulders grazed the wall, then pressed against it as he pushed closer. She couldn’t breathe, couldn’t slow the frantic pounding of her heart, the desperate urge to arch her spine, to press her body against his.

“Do not move.” His whisper brushed over her cheek, his breath sweetly scented by wine. Unable to ignore the command, her nerves sizzled as he closed the distance between them. His lips brushed hers, once. Twice. Then he plundered her mouth.

Posted by Molly Daniels at 4:52 AM

OMG, It's been years since I read Witch of Blackbird Pond. I remember being shocked when she was accused of being a witch (I know, the title didn't even clue me in).

It was great to meet you, Keena. Your story sounds so intriging.

Good morning, Molly. Thanks for having me here today. I really enjoyed our "chat." You ask great questions.

Linda,
Wasn't The Witch of Blackbird Pond a wonderful book? The title did clue me in, although I was a bit disappointed she wasn't really a witch, just accused of being one. LOL!

And I loved when she was rescued by the hero. I think I was hooked on romances from that moment.

I've never read that book, although from helping my kids study for tests over it, I know some of the story. I really need to read the whole thing; it sounds interesting:)

Molly, you should read the book. I do remember getting annoyed that Kit just didn't seem to "get it," i.e. that she was no longer in Barbados. But i'm not sure I would've fared better.

Thanks, Amber. I'm glad you stopped by.

LOL:) I think we have a copy around the house somewhere. I'll have to ask the daughter.

Thanks for being with me today Keena:)

Keena, I love the Wolfman, too, because of that same conflict. *wink*

I lay out a "basic" plot, but I find the story usually takes on it's own life and it's time to put on "panster" pants.

What an interesting background you have. Medieval history is very interesting. For me, I love how Jean Plaidy brings it alive.

Looking forward to seeing how you wrap up the conflict with Eleanor.