Welcome!  My special guest today is Laurie White, one of my fellow SCP authors:)  Before we get started, I need to hand you a fleece blanket.  Indiana is experiencing a frigid winter around here, and after being in the 20s all weekend, we've dropped back to the single digits.  So here you go *tucks it around Laurie and hands her a hot cup of cocoa*

Please introduce yourself and tell us about your latest release.
Thanks, Molly! I’m Laurie White, and I write romantic suspense for Secret Cravings Publishing. My latest release, WITHOUT A TRACE, came out in late January. It is about a journalist who finds out the story has turned personal when her sister disappears. Enter Matt Romero, the detective assigned to the case. J

Have you ever had an idea for a story which scared you after you began writing it?
Not really, no!

Have you incorporated actual events from your own life into your books?
I haven’t, at least not yet. My real life isn’t exciting enough, LOL!

How much research do you do?  Do you research first and then write, or do you write first, then research as needed?
I do a fair amount of research, mainly having to do with the law enforcement aspect of the stories. I usually research as I write.

Is there any message you want readers to take from reading your work?
I guess that love can overcome most anything if it’s strong enough. And that good triumphs over evil.

How long did it take for you to be published?
I’ve written off and on for about 15 years. Just got published in late 2012.

Laptop or pen and ink?  What are your ‘must-haves’ when writing?
I’ve always used a computer…now I love my Apple laptop.  The only must-have I need is a soda! And I also usually have a furry writing companion (one of my cats).

What would your readers be surprised to learn about you?
I used to work for the U.S. State Department in overseas embassies.
And you say your life isn't exciting enough.

What is your favorite love scene to write or read?  (ie: First kiss, passion after a fight, reunion)
It’s got to be the first kiss!

What is your favorite Valentine’s Day memory?
I can’t remember, LOL!

Sweetest gift ever given to you?
Anyone who gives me anything for my cats. J

Thank you for being here today!  Please tell us where we can find your books.

Thanks for having me, Molly! You can find my books on the Secret Cravings web site (www.secretcravingspublishing.com), on Amazon, Barnes & Noble, Smashwords, and All Romance E-Books. 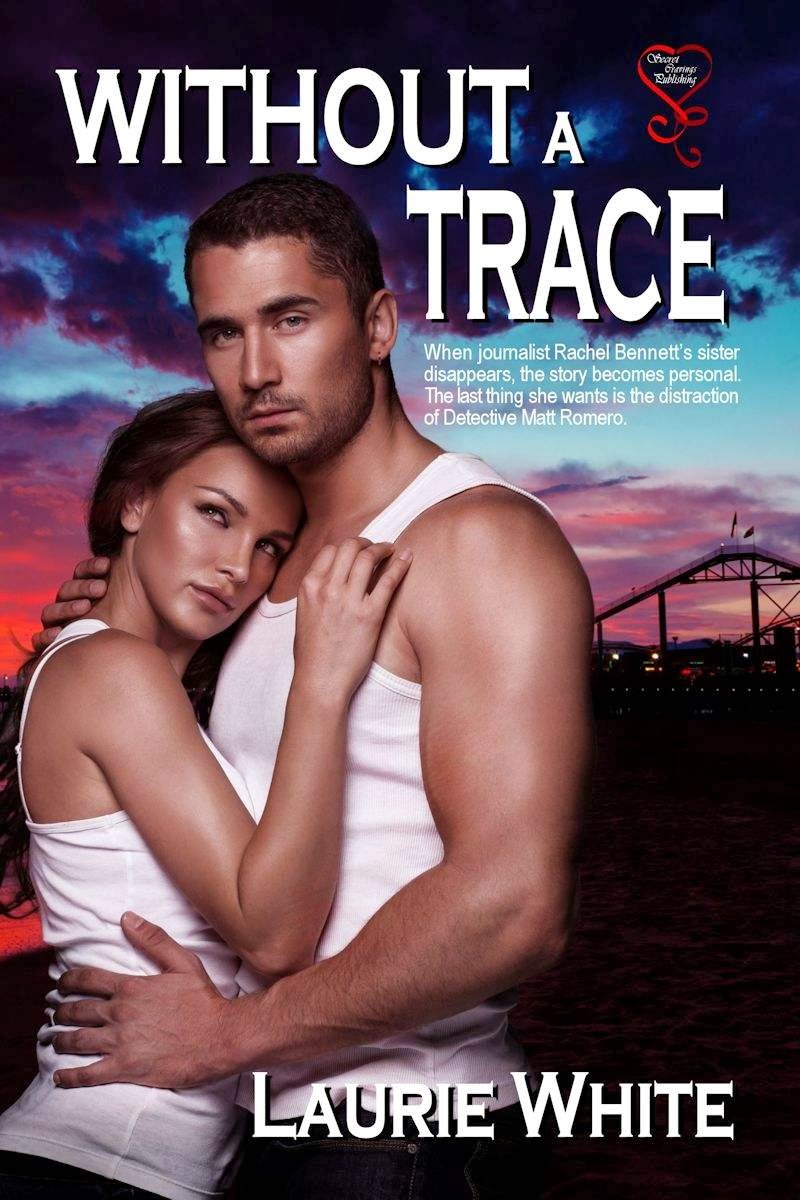 Blurb:
Magazine journalist Rachel Bennett has a reputation for getting to the heart of a story. However, when her sister disappears and is suspected of embezzling from her employer, the story has suddenly become personal. The last thing Rachel wants right now is the distraction of Matt Romero, the detective assigned to the case. She has no desire for involvement with a rough-and-tumble cop...or so she thinks....

Matt accepts the risk that goes with his job. Two years ago, his wife was murdered, a tragedy he blames himself for. He's vowed to protect his family and friends because he doesn't want to go through the pain of loss again. However, the lovely journalist soon begins breaking through the icy wall around his heart.

As Rachel and Matt search for answers in order to find her sister, they uncover a corruption that puts them both in danger – and a passion that puts both their hearts at risk.

Excerpt:
Rachel fluffed the scrambled eggs with vigorous strokes, the plastic spoon clattering against the metal skillet as she dwelled on the discussion with Matt. Her temples throbbed, as they always did when she felt frustrated.

Why wouldn't Matt listen to her? Why couldn't she make him believe Paige would never even consider committing a crime?

What an insufferable, overwhelming man he was. He had to be difficult to live with, if not downright impossible.

Rachel had never encountered a man like this rough-edged cop. The ones she usually associated with were those she considered safe—mild-mannered accountant types who wouldn't take any unnecessary risks in life. She'd had enough of risk-takers with her father. Matt Romero was definitely the type of man she avoided.

“The eggs are burning.”

Rachel jumped and shifted the skillet to a back burner. From out of nowhere Matt had appeared, looking much less like a cop than when she'd first seen him. Fresh from a shower, clean-shaven, he wore faded, well-fitting blue jeans with a dark gray T-shirt. His still-damp hair glistened like a raven’s feathers.

“You scared me half to death,” she barked, bringing one hand to her throat. “Please don't sneak up on me like that again.”

As he reached to turn off the burner his arm brushed hers, and she felt a twinge of heat. With a frown, she shook her head. Still jumpy from Matt's sudden appearance, that was all. Nothing else.

“Just trying to prevent a breakfast disaster. You were a thousand miles away.” A gleam of amusement shone in his eyes. “No, make that a million.”

She transferred the scrambled eggs to plates. Her cheeks grew warm, and she grew defensive. “If your sister were missing, suspected of embezzlement, and sick, I'm sure you'd be a little distracted too.”

“Of course I would.” He took the plates to the table while Rachel poured two steaming mugs of coffee, then removed two slices of toast from the toaster.
When she joined him at the table he cleared his throat and paused, as if searching for words. They seemed to come with difficulty. “I'm…sorry about earlier.”

To her he looked contrite, nervous and…adorable. She wanted to stay mad at him, but couldn't. Why did men always have to be so uncomfortable when discussing feelings? “I think we're both on edge.”

“Yeah. I tend to get a little worked up on a big case.” He picked up a knife and spread a liberal amount of butter on his toast, followed by a dollop of grape jam.

Rachel watched those intriguing hands again as she took a bite of her eggs and chewed. She felt the urge to take those hands in her own, but resisted, swallowing hard. “Speaking of the case, what's your and Detective Russell's agenda for today?”

“This morning I need to check out a restaurant one of Paige's co-workers mentioned. Your sister apparently has lunch at this place all the time. This co-worker said Paige came back from there very upset the day before she disappeared.”

“Did she have any idea why?”

“No, but I have a feeling Paige didn't dine alone that day. If anything happened, like an argument with someone else, I'm willing to bet one of the servers or managers saw it.”

Rachel nodded. “I waited tables during my second year of college. You wouldn't believe all the stuff that goes on. I doubt Paige could have gotten upset at the restaurant without at least one of the workers knowing.”

“Also, Julia is going by the phone company this morning with a warrant to pick up Paige's home phone records from the past six months.”

“Maybe from that we can find someone who can tell us where she is.”

“That's the general plan.” Matt stuffed a forkful of scrambled eggs into his mouth.

“Looks like you had a rough night.” She studied the dark circles under his eyes, feeling a tiny pang of guilt, although she couldn't figure out why. Matt had insisted on staying here last night.

With a hard swallow, he shifted in his chair. “You could say that.”

“I'm sorry you were uncomfortable. I know the sofa isn't very big—”

“It was fine. I just had a lot on my mind.” He leveled a penetrating gaze at her.
“You don't seem too chipper this morning, yourself.”

“I couldn't shut off my brain. I kept worrying about Paige.” Rachel hoped he wouldn't press the issue with more questions, since she suspected the vague, unsettled feeling that had plagued her last night was caused by something in addition to concern for Paige.

Even from behind the closed door of her bedroom she'd been so attuned to Matt, so aware of him. Once during the night, at the sound of his footsteps in the hall, she thought her heart would leap from her chest.

Had she been afraid he'd come into the room, or afraid he wouldn't? The answer eluded her, and she found that quite disturbing.

Then she realized a man hadn't stayed overnight at her place in what seemed like ages. No other explanation for her being so darn…jumpy.

Still troubled, she lifted her mug to her lips for a sip of Matt's strong, delicious coffee. She'd be very glad when Paige was found safe and proven innocent.

Nice interview! Cats are so helpful to writers, aren't they? :-)

They sure are, Liz. I wouldn't give anything for my furbabies. :-)

Thanks again for being here today Laurie:) I'm going to have to put this book on my TBB list now!

Hi Laurie! I love the cover and the blurb. My cat is a strange one. What fun things do your fur babies do?

I wish you all the best!!

Thanks again for having me, Molly!!

Melissa...my cats do funny things all the time: sleep in awkward positions, charge around the house for no reason, get in "spats" with each other. I'm always laughing at things they do.